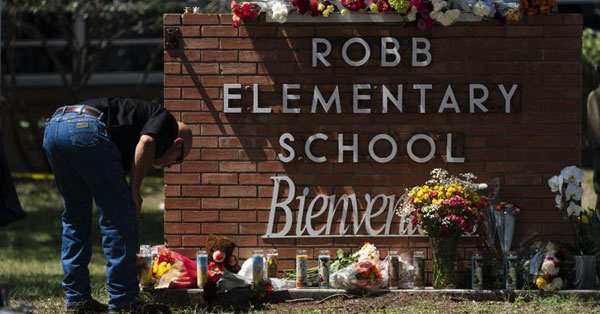 (The Center Square) – As the investigation continues into Tuesday’s elementary school shooting that left 19 children and two teachers dead, authorities on Wednesday provided more details into the moments leading up to the mass shooting.

At a Wednesday news conference that was briefly interrupted by Democratic candidate for Texas governor Beto O’Rourke, Republican Gov. Greg Abbott said the shooter, 18-year-old Uvalde resident Salvador Ramos, first shot his 66-year-old grandmother in the face at their home. The woman, who remains in critical condition at a local hospital, called police.

Ramos then got into his grandmother’s car and started driving toward Robb Elementary School. He crashed his car about a block-and-a-half away, Steven McCraw, director of the Texas Department of Public Safety, said. Ramos then exited the vehicle with a backpack and a semi-automatic rifle and walked toward the school.

“As he was approaching, a school district resource officer engaged him, but the subject was able to make it into the school,” Abbott said.

Inside the school, Ramos made a couple of turns before approaching two classrooms.

“That’s where the carnage began,” a law enforcement officer said.

Abbott said “there was no meaningful forewarnings of this crime,” other than three Facebook messages the shooter posted shortly before the shootings occurred.

About 30 minutes before the school shooting, he posted, “‘First, I’m going to shoot my grandmother,'” Abbott said.

Shortly thereafter, he posted, “‘I did shoot my grandmother,'” Abbott said.

His third post was, “‘I’m going to shoot an elementary school,'” the governor said of the shooter.

At least 21 people were killed and multiple others were injured. The victims were mostly third and fourth graders, according to law enforcement officials. Some family members are posting pictures of their lost loved ones.

Police said they still don’t have a motive for the mass shooting. They also said Ramos had no know criminal or mental health history.

An agent with the Border Patrol Tactical Unit (BORTAC), who was near the school and heard the gunshots, entered the school along with local police, shot and killed Ramos, Abbott said. Three officers were shot and wounded on the scene and are expected to survive, Abbott said.

Neighbors told multiple media outlets that it took police up to 40 minutes to enter the school.

Counseling for Robb Elementary staff started at 8 a.m. Wednesday, and at 10 a.m. for the general public.

Into Wednesday, identification and notification efforts were still going on at the Uvalde Civic Center, where families were entering with photos of their children and providing DNA.

Officials from the Texas Department of Public Safety and Texas Rangers are working with local and federal law enforcement to fully investigate the crime. The Texas Division of Emergency Management is also providing local officials with necessary resources.

“Texans across the state are grieving for the victims of this senseless crime and for the community of Uvalde,” Abbott said.

The city of Uvalde is accepting donations to help victims’ families with medical expenses. Donations can be made via check to the City of Uvalde and mailed to P.O. Box 799, Uvalde, Texas 78802.

“We are working on setting up an online option for donations and will post that information as soon as we have that ready,” the city said on its Facebook page. Those with questions are instructed to contact Gloria Resma at gresma@uvaldetx.gov or 830-278-3315 or Susan Anderson at sanderson@uvaldetx.gov.

San Antonio Mayor Ron Nirenberg invited members of the public to join an interfaith gathering at 6 p.m. Wednesday in Main Plaza in San Antonio. They were gathering “in witness to and in deep compassion for the painful losses of our neighbors in Uvalde,” he said. “Our time together will be a time of standing in solidarity, silence, and prayer. Uvalde is not alone.”

The city of San Antonio lowered its flags to half-staff and asked all businesses and organizations to do likewise.

Tuesday’s shooting marked the deadliest one at an elementary school since Sandy Hook in Newtown, Connecticut, in 2012. Ten years ago, 20-year-old Adam Lanza shot and killed 26 people, the majority of whom were children between the ages of 6 and 7.