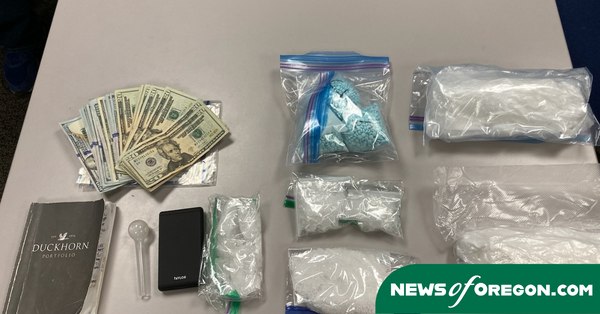 Baker County – Within the last four months, the Baker County Narcotics Enforcement Team (BCNET) has concluded multiple narcotic investigations. The investigations all stemmed from Baker City and were initiated by BCNET.

On September 26th, 2022, detectives executed a search warrant at 3225 H Street in Baker City. The target of that warrant was GAGE NIEHAUS, age 23. During the search, detectives located small amounts of methamphetamine, fentanyl pills, and as well as evidence of drug sales. Charges are pending upon review by the Baker County District Attorney’s Office.

On September 30th, 2022, RICH CAROLL, 52, was arrested on a narcotics team case involving gun and drug charges. Then on October 3rd, 2022, detectives arrested Tom Carroll for possession of methamphetamine and violation of his release agreement. Detectives followed up the arrests with the execution of a search warrant at CARROLL’s residence, 1129 Elm Street in Baker City. Detectives located numerous suspected stolen items, mostly tools as well as four AR-15 rifles. This case is under review at the Baker County District Attorney’s Office and the United States Assistant Attorney General’s Office.

On October 7th, 2022, detectives executed a search warrant at 2045 Virginia Avenue in Baker City. The target of the warrant was DOUGLAS CLAYBORN, age 65. During the search, detectives located about 1500 fentanyl pills, over ½ ounce of methamphetamine, and other items indicative of narcotics trafficking. CLAYBORN was also cited for two counts of unlawful delivery of heroin and one count of unlawful delivery of methamphetamine stemming from a secret indictment on a separate narcotics team case. A plea hearing is pending for this case.

On October 19th, 2022, MAKALA LAFFERTY, age 25, was taken into custody on a Baker County Circuit Court Secret Indictment Warrant for unlawful delivery of heroin. She was cited at the Baker County Jail where she was incarcerated on other charges.

On November 8, 2022, CARMON HENDRIKSEN, 34, was taken into custody on a Baker County Circuit Court Secret Indictment Warrant for unlawful delivery of methamphetamine. She was located in Baker City.

On November 11, 2022, JOSHUA JAMES SMITH, 40, was taken into custody on a Baker County Circuit Court Secret Indictment Warrant for unlawful delivery of methamphetamine. He was located in Baker City.

As a result of these investigations, Baker City detectives worked with other law enforcement agencies and task forces throughout the State of Oregon in following up on additional leads and sources of narcotics coming into our community. To date, police have seized over 20 pounds of methamphetamine and over 9000 fentanyl pills. These investigations are ongoing.

The mission of the narcotics team is to disrupt and/or dismantle mid to upper-level drug trafficking individuals and organizations, address violent crime as well as provide valuable intelligence and investigative resources to all law enforcement regarding unlawful criminal activity. Detectives assigned to these teams not only investigate narcotics trafficking but play a major role in major crime team cases.

Below are some photos of narcotics seized during these investigations.