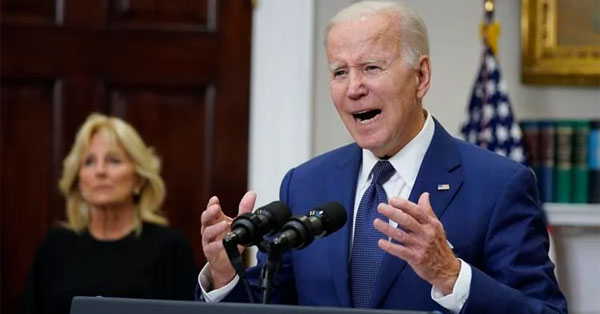 (The Center Square) – President Joe Biden on Saturday signed bipartisan gun control legislation meant to take guns out of the hands of individuals deemed a threat, though critics say that’s a violation of due process rights. The measure also imposes more thorough background checks on buyers under the age of 21.

It does not include a ban on AR-15-style weapons or limit the number of bullets in magazines.

“While this bill doesn’t do everything I want, it does include actions I’ve long called for that are going to save lives,” Biden said when signing the measure Saturday. “Today, we say more than ‘enough.’ We say more than enough. This time, when it seems impossible to get anything done in Washington, we are doing something consequential.”

The U.S. House passed the Safer Communities Act Friday by a vote of 234-193 after the Senate passed it Thursday night by a vote of 65-33.

The bill was proposed and passed in response to a mass shooting in Uvalde, Texas, when police reportedly stood by as 19 children and two teachers were shot and killed. Although an investigation is ongoing, Texas Department of Public Safety Director Steve McCraw recently said the Uvalde’s police response “was an abject failure” and they could have stopped the shooter within three minutes if they had done their jobs.

“From Columbine to Sandy Hook to Charleston, Orlando, Las Vegas, Parkland, El Paso, Atlanta, Buffalo, Uvalde, and for the shootings that happen every day in the streets, how many times have you heard that, ‘just do something, for God’s sake just do something’?” Biden said. “Today, we did.”

U.S. Sen. John Cornyn, R-Texas, led a bipartisan group in the Senate to push through the gun control bill, arguing it “will save lives while placing no new restrictions on law-abiding gun owners.”

A solution to actually improve school safety would have been to pass his bill, Cruz said, which “goes after criminals and supports law enforcement while protecting the Second Amendment.”

Every time there’s a mass shooting, Cruz said, there’s a reaction in Washington, D.C., to restrict lawful gun owners’ constitutionally protected rights. There are two approaches to addressing violence, he said. The first is to “target the bad guys,” including criminals, felons, fugitives, those illegally buying guns, and those committing violent crimes with firearms, he said.

“Prosecute them, put them in jail, get them off the street,” the Texas senator said, which is what his bill proposed.

Cruz’s bill would have devoted resources to prosecuting criminals and to doubling the number of police officers in schools, provisions the bills Congress passed don’t include.

The second approach “is to target law-abiding citizens,” he said. “To try to strip away the right to keep and bear arms. … Unfortunately, whenever there’s a horrific crime, Democrats immediately go to the second approach,” which he argues is unconstitutional. This time, 29 Republicans joined Democrats in passing the Safer Communities Act.

In response to ongoing criticism he’s received, including by Texas conservatives who jeered at him throughout the Texas Republican Party Convention last week in Houston, Cornyn began tweeting about the bill. He said the bill “DOES NOT create a national red flag law, DOES NOT require or incentivize states to adopt red flag laws and no state is penalized for not passing one.”

Red flag laws refer to the process allowed in some states whereby “a law enforcement official, family member, or household member petitions a state court to temporarily remove firearms from someone they believe to be a danger to themselves or others. In some states, the list of eligible petitioners can include school officials, health care workers, or even coworkers,” U.S. Law Shield explains.

But the Safer Communities Act would “force states with red flag laws to adopt strict and comprehensive due process before they qualify for funding,” Cornyn said.

The bill also includes a provision to close a so-called “boyfriend loophole,” which is unrelated to causes of the Uvalde shooting. It includes prohibiting those with a domestic violence record from purchasing a firearm

“Unless you are convicted of domestic violence, this will have NO IMPACT on your gun rights,” Cornyn said.

The vote came after the Supreme Court issued the most significant Second Amendment ruling in over a decade, handing a win to the National Rifle Association, which challenged a New York law in NYSRPA v. Bruen. The court held that the Second Amendment protects the right of law-abiding citizens to carry a firearm outside their homes.

What the Supreme Court got right, the NRA argues, Congress got wrong.

While it supports “school safety with dedicated resources at the federal level, an investment in better access to, and quality of, mental health care,” the NRA said it won’t support “senseless gun control measures that some in Congress have already said is just a first step that ‘paves the way’ for additional gun control that will only infringe on the rights of the law-abiding.”

The bills “were hastily jammed through with ambiguous language and overbroad definitions to appease gun control supporters in Congress,” the NRA added.