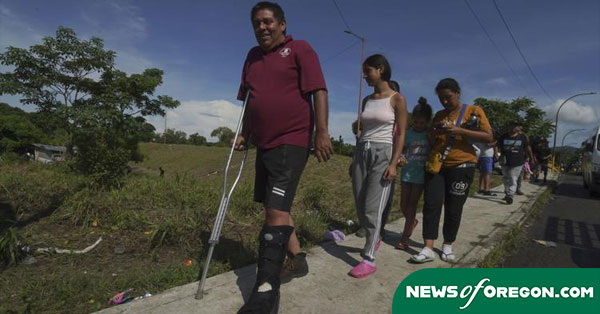 (The Center Square) – U.S Customs and Border Protection-Laredo Office is cautioning the public about a “significant amount of immigration law violations throughout South Texas ports of entry” and warning potential traffickers of people and drugs about the “serious legal consequences for criminal violations of immigration law.”

The warning comes as a record more than 2 million people have illegally entered the U.S. and been apprehended at the southern border and as the Biden administration continues to release a record number of people into the U.S. instead of deporting them.

“We want to reach out to the community to advise that we are experiencing an uptick in immigration law violations at South Texas ports of entry and to warn the public against lending valid entry documents to facilitate illegal crossings or falsely claiming U.S. citizenship as it can cost you your liberty and for noncitizens, your ability to lawfully enter the U.S. in the future,” CBP-Laredo Director of Field Operations Randy J. Howe said in a statement.

Immigration law violations, he said, include “being an impostor (using a legitimate entry document that does not belong to you), using a fraudulent or altered entry document, falsely claiming U.S. citizenship, child smuggling/falsely claiming U.S. citizenship for minors traveling with you/providing U.S. birth certificates belonging to other people.”

All violators may be arrested, prosecuted and potentially incarcerated, he said. Non-U.S. citizens who commit federal immigration crimes also “face removal from the U.S. upon final adjudication of their criminal case and will not be eligible to return to the U.S. for a significant period of time,” he said.

The warning comes months after CBP launched a digital ad campaign in the Northern Triangle countries of Honduras and Guatemala warning citizens there about the dangers of human smuggling. One ad in Spanish states, “Smugglers are lying to you, the fact is that entering the United States illegally is a crime.”

The ad campaign was supposed to have reached Northern Triangle residents using mobile devices, social media and other digital platforms in both English and Spanish. They warn that many who make the journey north are jailed, kidnapped, extorted, and left to die by those transporting them.

In fiscal 2021, residents of Northern Central American countries accounted for 44% of those attempting to enter the U.S. illegally at the southern border.

While the Biden administration has officially claimed the border remains closed, top officials have acknowledged an unprecedented crisis exists and fewer people are being removed than under previous administrations because of Biden’s policies.

In a recent deposition with Florida Attorney General Ashley Moody’s office, U.S. Border Patrol Chief Raul Ortiz admitted the southern border is “currently in a crisis.” Despite this, and in anticipation of increased border encounters after the Title 42 health authority is lifted, Ortiz instructed agents to release noncitizens into the U.S. because there wouldn’t be enough space to detain them, a memo obtained as part of Florida’s lawsuit against the Biden administration uncovered.

In May, Ortiz instructed CBP agents to release “processed noncitizens in the vicinity of nongovernmental organizations” and coordinate with NGOs in advance as to the specific locations where they’d be released, “paying particular attention to the availability of services and transportation options.”

The scheme was halted by a federal court in May as a result of a lawsuit filed against the administration by 24 states, including Florida.

Moody’s office also deposed Corey Price, Immigration and Customs Enforcement (ICE) executive associate director for Enforcement and Removal Operations who testified that ICE agents are currently removing seven times fewer people who entered the U.S. illegally in the past year than ICE did 10 years ago.

ICE is detaining only about half the number of people it did during the Trump administration and 40% fewer the number of people who entered the U.S. illegally now than it did during the last border surge in 2019. Instead of detaining and processing for removal those who enter the U.S. illegally, ICE agents are releasing them into the U.S., he said.

U.S. Rep. Matt Gaetz, R-Florida, has calculated that “It would take 14.5 years to deport just the aliens DHS has released under the Biden Administration, when we have near 1.9 million aliens eligible for deportation currently.”