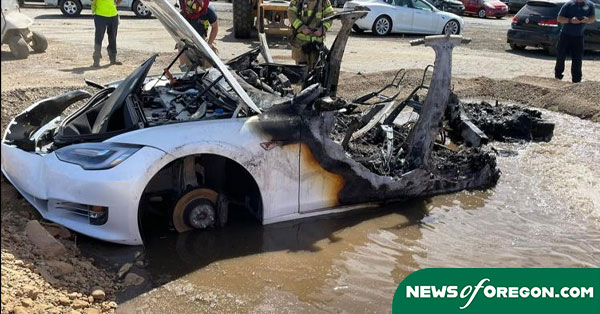 (The Center Square) – When an electric vehicle caught fire in California, emergency services dumped 4,500 gallons of water on it. Critics say the example explains how EVs can harm the environment.

The Sacramento Metropolitan Fire District posted on Facebook on June 11 the Tesla caught ablaze three weeks after a crash while it sat in a junkyard.

“Crews knocked the fire down, but the car kept re-igniting and off-gassing in the battery compartment,” the post said. “Working with the on-site wrecking yard personnel, the Tesla was moved on its side to gain access to the battery compartment underneath. Even with direct penetration, the vehicle would still re-ignite due to the residual heat.”

Firefighters submerged the vehicle’s battery component in a water-filled pit but still needed 4,500 gallons to permanently extinguish the fire. No injuries were reported.

The fire kept reigniting because of thermal runaway, which occurs when lithium-ion battery cells self-heat in reaction to extreme temperatures, fire, or gas or shrapnel, causing them to burn hotter, faster, and even reignite after initially extinguished, according to science group UL Research.

Extracting precious metals essential for EVs, and extinguishing EV fires are resource intensive. Govtech reported that it takes about 500,000 gallons of water to mine one metric ton of lithium.

The battery pack of one Tesla requires seven kilograms of lithium, extracted from the brine of salt flats that can damage the environment and cause water shortages, such as in Chile and Argentina, Ronald J. Deibert explains in his book “Reset: Reclaiming the Internet for a Civil Society.”

EV fires appear to be rare but will happen more often if many Americans adopt EVs. Only about 13,545 EVs are registered in Michigan.

Ann Arbor Fire Chief Mike Kennedy told The Center Square that they haven’t seen an EV fire yet, but his department is prepared.

“We have not, but know it is only a matter of time,” Kennedy wrote in an email. “We have updated our policies and trained in preparation.”

Mark P Mills, a senior fellow at the Manhattan Institute and a Faculty Fellow at the McCormick School of Engineering at Northwestern University, told Congress that producing a single 1,000-pound EV battery requires companies to mine, move, and process over 500,000 pounds of raw materials. He argued that EVs demand more intensive mining relative to producing vehicles with efficient internal combustion engines.

“Obtaining the minerals needed to fabricate the 50 tons of batteries requires mining and processing roughly 25,000 tons of materials,” Mills said. “This kind of disparity really adds up at grid scales.”

Jason Hayes, director of environmental policy at the Mackinac Center, pointed to a “growing” list of impacts of transitioning to EVs.

“The threat of dangerous fires from overheated batteries is only another thread in the growing list of stories about the impacts of transitioning to electric vehicles,” Hayes said in a statement. “The other obvious impacts are associated with their radical increase in the need for ever more materials.”

“Those increased mineral levels require correspondingly higher levels of mining activity, which has its own list of environmental impacts,” Hayes continued. “The only reason that government, green groups, and auto manufacturers can pretend that EVs don’t have their own extensive list of safety and environmental impacts is because we are often myopically focused on CO2 emissions. It’s well past time for policy makers to reorient on the full impacts of transitioning from internal combustion engine vehicles to EVs. “