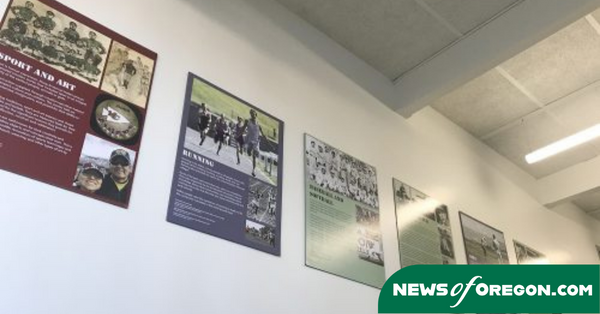 La Grande, Ore. – A collaboration between Eastern Oregon University (EOU) and the Josephy Center for Arts and Culture has brought a “Native Sport” exhibit to Quinn Coliseum on January 17.

The “Native Sport” exhibit will focus on Native American athletes and will highlight regional tribal members.

“It has been an honor to work with the Josephy Center and EOU Athletics to bring the exhibit to the EOU Campus and to share Native Sports with our community,” Linda Reed-Jerofke, Professor of Anthropology said.

The exhibit was installed on January 16 and opened to the public in Quinn Coliseum from January 17 through March 17, 2023.

The opening reception will be on January 24 in Quinn Coliseum from 5 p.m. to 7 p.m. and is sponsored by the EOU Native American Studies Minor, EOU Athletics, EOU’s Center for Diversity Equity Inclusion and Belonging, and EOU’s Anthropology and Sociology Program.