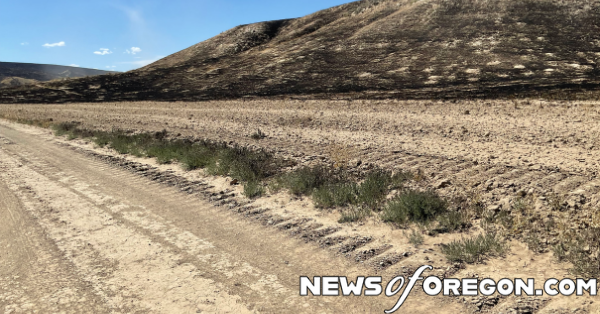 Nearly 22 years ago, the BLM Vale District worked with local landowners and other partners to reduce vegetation in key locations in the northeast corner of Malheur County. Back in 2000, the 80,000-acre Jackson Fire burned through similar terrain as the recent Willowcreek Fire. Its impacts were felt by residents of Vale and Ontario, prompting discussions about future wildfire safety. Local leaders then created the Malheur County Community Wildfire Protection Plan, which called for fuel breaks spanning a network of public and private lands.

To create fire breaks, crews from the BLM and partner organizations strategically removed overgrown vegetation by mowing, creating disc lines, and chemical spraying. Disc lines are created using a tractor with an attachment made of metal discs to expose bare dirt. This leaves little fuel for a fire to burn. Combined with a system of existing roads, these barriers made all the difference with suppression efforts on the Willowcreek Fire.

“Being proactive saved us from having a fire twice as big,” said Toby McBride, a volunteer with the Vale Rangeland Fire Protection Association. McBride assists with the fuels break project and was on the ground at the Willowcreek Fire. “The wind was blowing pretty good, but the fire burned right up to the lines and went out. I don’t think we would’ve held it at the road without them.”

Firefighters used a combination of roads and disc lines to create a 50-foot buffer between unburned grass and flames. Additional mowing and chemical treatments each year keep grasses and other plants to a minimum.

“We’ve been maintaining these man-made fuel barriers over the last two decades,” said Justin Robinson, BLM Vale Fuels Technician. “We’re making it safer for our firefighters and our communities.”

“Fuel breaks helped firefighters contain the Willowcreek Fire without bulldozers or other heavy equipment,” Robinson added. “This project’s success shows us how important collaboration can be to protect local communities from wildfires.”