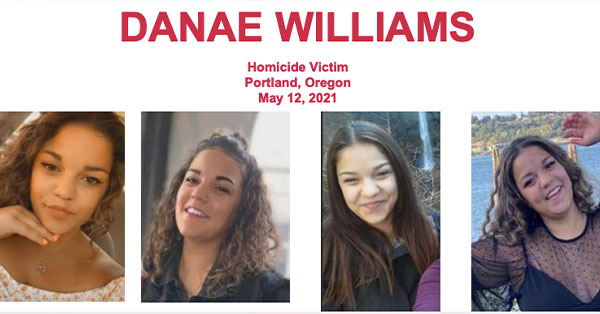 PORTLAND – Wednesday, May 11, the FBI announced a $15,000 reward for information leading to the arrest and conviction of the individual or individuals responsible for the murder of Danae Williams.

The FBI made the announcement today, alongside the family of Danae Williams. The Portland Police Bureau and the Multnomah County District Attorney’s Office joined the announcement.

On May 12, 2021, at 8:55 p.m., Danae Williams, age 25, was in her car, stopped at a red light, in the area of NE Martin Luther King, Jr. Boulevard and NE Dekum Street in Portland. As the light changed, a silver sedan pulled up along the passenger side of the car and someone fired multiple rounds into the vehicle. Williams was shot and died of her wounds the following day. A passenger in the car was also shot in the head but survived. Investigators believe Williams and her passenger were innocent victims of an ongoing violent dispute between rival gangs.

“Today we announced a $15,000 reward for information leading to the identification, arrest and conviction of the individual or individuals responsible for Danae’s death,” FBI Portland Special Agent in Charge Kieran Ramsey said. “It’s long past time for us to come together as a community and find justice for Danae and the many other victims of violence in Portland. Today’s announcement reiterates our commitment, as the Metro Safe Streets Task Force, to finding justice for victims of violence in this city.”

If anyone has information, witnessed any part of what happened, or has video of anything that happened prior to, during, or after these shootings, they are asked to contact PPB by emailing crimetips@portlandoregon.gov or contacting the FBI at 1 (800) CALL-FBI or at tips.fbi.gov.