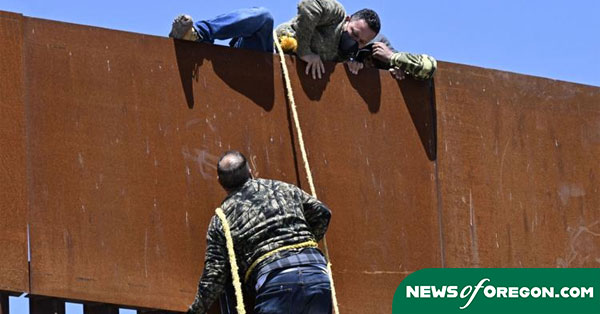 Homeland Security Investigations special agents found another stash house this week where 29 foreign nationals were being held in dire conditions, the agency said.

They included 12 Mexicans, 8 Ecuadorians, 7 Guatemalans, one Honduran, and one El Salvadoran. Among them were 24 men and five women between the ages of 18 and 42. All were turned over to the U.S. Border Patrol for processing.

Both HSI and Border Patrol are conducting an investigation into the smuggling incident.

The foreign nationals who’d entered the U.S. illegally were found in a house in the 3700 block of Nashville Avenue, agents said. They were believed to have been held there against their will for between one and four days. The house has no working stove, refrigerator, air conditioning, or bathroom.

HSI made the announcement after the FBI El Paso office has been issuing warnings every month about El Paso is a central destination for human smuggling, kidnapping, and extortion.

Stash houses can be homes, sheds or any structure used to hide illegal activity from law enforcement, the FBI explains, “to blend in, so they can be found even in the middle of a city or gated community.” They often create life-threatening conditions because they aren’t adequately ventilated, cooled, or heated.

Citizens can identify a stash house by a lot of trash placed outside, or multiple water jugs or disposable plates lying on the ground. Different types of vehicles, especially vans and pickup trucks, often are seen entering and exiting the property at all hours of the day or night, and the vehicles have different license plates, including paper “buyer” or “dealer” tags.

El Paso is located directly across the Rio Grande River from Ciudad Juárez, Mexico, one of the most violent places in the world. The Juárez Cartel and street gangs associated with it, La Línea and Bario Azteca, are warring with the Sinaloa Cartel for control of a multi-billion-dollar human trafficking and drug trade.

Human smuggling is a felony, according to state and federal law, carrying different sentences depending on the degree of harm inflicted. The crime often involves willing participants who pay to be brought illegally into the U.S. who don’t realize how dangerous the journey is or that they will likely be held in bondage once they arrive.

HSI’s announcement came after its special agents had also just arrested two men connected to the death of a Guatemalan man who’d entered the U.S. illegally.

Axel Elias Ramirez, 19, a U.S. citizen, and Jorge Soto-Ochoa, 34, a Mexican national, “were charged with conspiracy to transport and harbor illegal aliens for profit, which carries a maximum penalty of 10 years in prison, a maximum fine of $250,000, or both,” HSI reported.

On Aug. 15, Ramirez was transporting seven foreign nationals who’d illegally entered the U.S. in El Paso at around 4:45 a.m. After he lost control of the vehicle he was transporting them in, the vehicle fell into an irrigation canal at Upper Valley Road and Via De Los Arboles. The accident caused the death of one Guatemalan man and injuries of seven others, including Ramirez.

“This horrific accident is yet another example of the dangers of illegally crossing the border, as well as the total disregard for safety and life by greedy, reckless human smugglers,” Burrola said. “HSI is committed to disrupting and dismantling these transnational criminal organizations in collaboration with our partners at the U.S. Border Patrol and El Paso Police Department because illicit smuggling networks not only jeopardize the lives of its victims but endanger public safety.”

Soto-Ochoa was the foot guide in the smuggling scheme, according to court documents. Both men made their initial appearance in federal court on August 17 and are being held without bond.

The apprehensions and arrests are part of HSI El Paso’s efforts to curb human smuggling in the Santa Teresa, New Mexico, area.

Members of the public are encouraged to report alleged smuggling activity by calling 1-866-347-2423 or completing an online tip form.

They are also encouraged to contact the FBI El Paso office at 915-832-5000. Tips can be submitted anonymously at https://tips.fbi.gov.