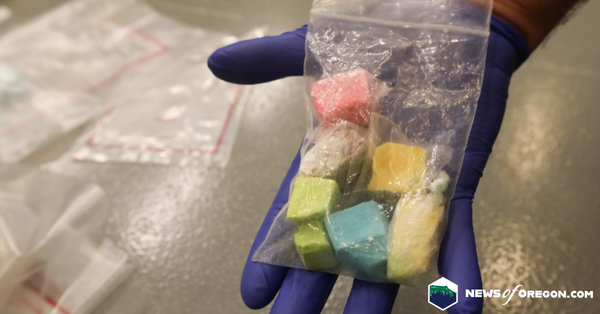 PORTLAND, Ore.—With at least two notable seizures in the last several days in the Portland Metropolitan Area, officials from the U.S. Attorney’s Office for the District of Oregon, and U.S. Drug Enforcement Administration are warning Oregonians to be on the lookout for “rainbow fentanyl,” a brightly-colored version of the highly-toxic synthetic opioid responsible for hundreds of fatal overdoses every day in the United States.

Rainbow fentanyl has appeared recently in several forms in cities across the country. A version seized recently in the Portland area resembles thick pieces of brightly-colored sidewalk chalk. Some versions seized elsewhere in pill or tablet form resemble candy.

If you or someone you know encounter any version of fentanyl, please refrain from handling it and call 911 immediately.

“We urge all Oregonians to be on the lookout for fentanyl in our community and respect the highly-toxic nature of this substance,” said Steve Mygrant, Chief of the Narcotics and Criminal Enterprises Unit of the U.S. Attorney’s Office for the District of Oregon. “Fentanyl is commonly disguised in fake prescription pills. If you find or come in contact with pills not dispersed by a licensed pharmacist, assume they are fake and potentially lethal. Fake pills are indistinguishable from real pills.”

“Fentanyl is the deadliest drug threat we face today,” said DEA Acting Special Agent in Charge Jacob D. Galvan from the Seattle Field Division. “It doesn’t matter what color, shape, or form it comes in; just two milligrams of fentanyl – the equivalent of 10 to 15 grains of salt – is enough to kill someone. DEA’s Portland Office is seizing record amounts of fentanyl and we will continue this important work because we know American lives are at stake.”

Opioid abuse affects communities across the nation. Provisional data from the Centers for Disease Control and Prevention (CDC) indicate that there were more than 107,000 fatal drug overdoses in the U.S. in 2021, an increase of nearly 15% from the previous year. Synthetic opioids (primarily fentanyl) accounted for more than three-quarters of these deaths. Drug overdose continues to be the leading cause of injury or death in the United States.

If you are in immediate danger, please call 911.

If you or someone you know suffers from addiction, please call the Lines for Life substance abuse helpline at 1-800-923-4357 or visit www.linesforlife.org. Phone support is available 24 hours a day, seven days a week. You can also text “RecoveryNow” to 839863 between 8:00 am and 11:00 pm Pacific Time daily.