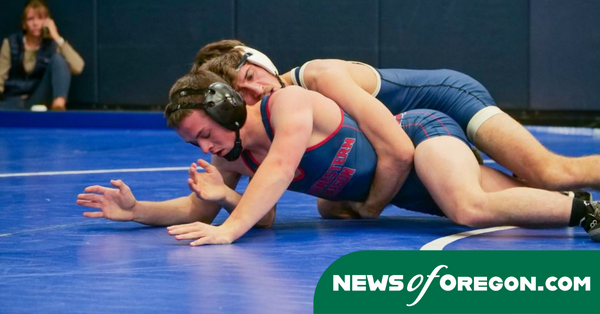 Leading the way for the Mounties was Marco Retano with a third-place finish. The 197-pounder went 4-1 on the day recording every victory via decision. In his first match he took home an 11-4 decision over Providence’s Liam Swanson followed by a 14-7 decision over Grand View’s Andrew Hamilton. His lone loss came in the semifinals to Grand View’s Owen Braungardt who won 5-0. In his last match of the day, Retano defeated Baker’s Malachi Karibo in a 4-1 decision. Retano matched up with teammate Jay Smith in the third-place match taking the win via a Smith forfeit.

Smith, with his forfeit to Retano, was one of two fourth place finishers for the Mountaineers. The junior went 5-2 on the day including the forfeit. He dropped his first match to Garavous Kouekabakilaho of Grandview in a tight 4-1 decision. Smith then went on to win his next five matches. In the first of the five he recorded a win by major decision over Missouri Valley’s Athonie Banuelos, 13-0. He then defeated Liam Swanson of Providence and Trent Strong of Central Missouri via 7-3 decisions in both matches. In his fifth match of the day Smith won via injury default over Midway’s Isaiah McDougal. Then in his final match Smith defeated Jack Serview of Marian University with an 8-0 major decision.

Eastern’s only other finisher in the top five was Kyle Knudtson who also took fourth. Knudtson went 4-2 on the day picking up a pair of pins. In his first match the junior won via a fall over Providence’s Caleb Werner. A match later he dropped a close 5-3 decision to Grand View’s Tyson Beauperthuy. Knudtson took the next two matches racking up 33 points between the two beating Providence’s Alan Badley in a major decision, 16-8, and Ottawa’s Jesse Daniel Perez in a 17-13 decision. For his last win of the day, Knudtson pinned Baker’s Brett Bober in one minute and 34 seconds. Marian University’s Sam Osho defeated Kundtson in the third-place match via a 13-8 decision.

Also placing for the Mountaineers was Hunter Sparks and Keegan Mulhill. Sparks went 2-3 on the day finishing in sixth place and having two of his losses come due to medical forfeit. Mulhill got off to a hot start on his way to a sixth-place finish. The senior went 3-3 on the day winning his first three matches picking up a pin and a tech fall.

Eastern Oregon Men’s Wrestling is back in action tomorrow for another tournament. The Mountaineers will be competing in the Mike Clock Open hosted in Forest Grove, Ore. on Sunday.