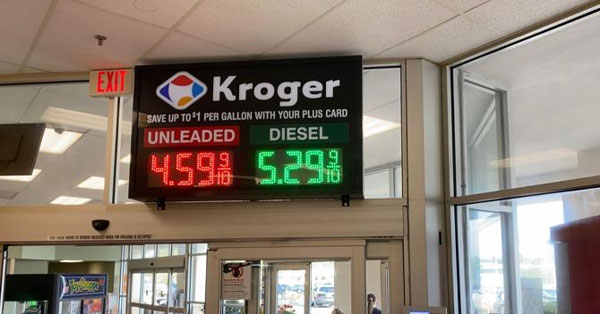 (The Center Square) – Gas prices hit another record high Tuesday, the latest in more than a dozen record high days this month.

Gas prices had hit record highs every day for two weeks during May before dipping down slightly. Now, with two consecutive record days, another run of record highs may be on the way.

The national average price for a gallon of unleaded gasoline topped $4.62, up from an average of $3.05 at the same time last year.

Every U.S. state is well over $4 per gallon on average, with several states topping $5, namely Alaska, California, Hawaii, Illinois, Nevada, Oregon and Washington. California is the only state to top an average price of $6, with unleaded gas selling for $6.17 in the golden state.

Diesel gas prices have been much higher as well, though slightly down from the record set earlier this month. The current national average for diesel gas is $5.52 per gallon, up from $3.19 per gallon at the same time last year.

Americans felt the pain at the pump while traveling for the Memorial Day weekend. Recent polling shows many Americans plan to cancel or modify their summer vacations because of higher prices.

Meanwhile, Republicans have blasted President Joe Biden for the prices, saying his policies limiting oil drilling and pipeline development are to blame.