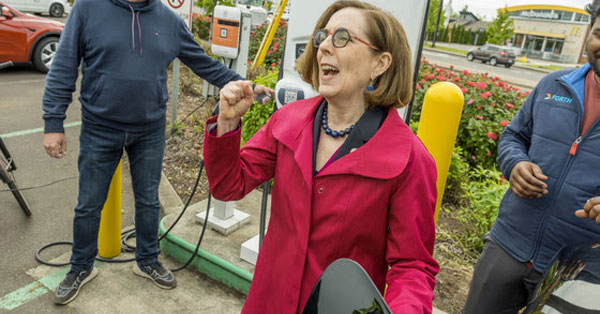 (Salem, OR) — Governor Kate Brown today announced her intention to use the pending, previously announced appellate judicial appointment process to build a pool of candidates that the Governor can draw from to fill any further vacancies that may arise on the Oregon Supreme Court or Oregon Court of Appeals during the remainder of her term of office.

Last week, the Governor’s Office opened a judicial appointment process, to fill a vacancy on the Oregon Supreme Court resulting from Justice Thomas Balmer’s planned retirement. Since that announcement, the Governor’s Office has received inquiries as to whether candidates who apply for Justice Balmer’s position will also be considered for other appellate court vacancies, in the event that such vacancies occur later this year.

Governor Brown has decided to expand the pending appellate judicial appointment process, and invites applications from individuals interested in Justice Balmer’s position, or any other vacancy that may arise later this year on the Oregon Supreme Court or Oregon Court of Appeals.

Applicants who already submitted interest forms as part of last year’s combined appellate judicial process will be automatically considered, and need not apply again. (A list of those applicants can be found here.) Individuals who did not apply during last year’s appointment process and who would like to be considered should address their completed application forms to the General Counsel for the Office of the Governor, and email (no mail or hand delivery) those completed forms to Shevaun Gutridge at shevaun.gutridge@oregon.gov. Forms must be received by 5:00 p.m. on Wednesday, October 19, 2022. Applicants should specify whether they are interested in a position on the Oregon Supreme Court, the Oregon Court of Appeals, or both.

Governor Brown fills judicial vacancies based on merit. She encourages applications from lawyers with a wide variety of backgrounds and experiences.

For questions about the appointment process, or to request an interest form, contact Shevaun Gutridge, at 503-378-6246 or shevaun.gutridge@oregon.gov. The Appellate/Supreme Court Judicial Interest Form is available online.