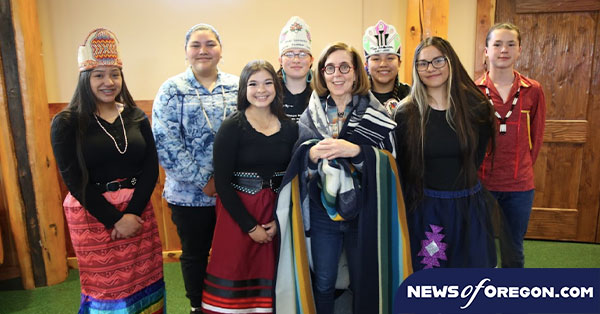 SALEM — Governor Kate Brown traveled to Chiloquin this week, where she visited the Klamath Tribes, including the newly elected Tribal Chair Clayton Dumont, Tribal Council Members, and members of the Klamath Tribes Youth Council. During the visit, the Governor visited the Tribe’s fish rearing ponds and water quality lab and discussed water issues, wildfire, and child welfare with Tribal leaders.

While in Klamath County, the Governor visited Kingsley Air National Guard Base and met the Kingsley Fire Team, which supports the base and the City of Klamath, and thanked them for their service. She also met with representatives of the Klamath Water Users Association and homeowners impacted by drought. The Governor also visited a home with a domestic well that had run dry with Klamath County Chair Kelley Minty Morris. The Oregon Department of Human Services, Oregon Office of Emergency Management, and the Governor’s Regional Solutions Office have worked with Klamath County leaders to fund water deliveries to homeowners whose domestic wells have run dry.

Continued Governor Brown: “It is another difficult drought year in Oregon, and I am committed to helping Oregonians impacted by drought with state resources, and to working with our congressional delegation and the Biden-Harris administration to secure federal assistance. What is clear is that everyone who lives in the Klamath Basin faces the impacts of severe drought, and the path forward is for all of us to work together to find collaborative solutions.”