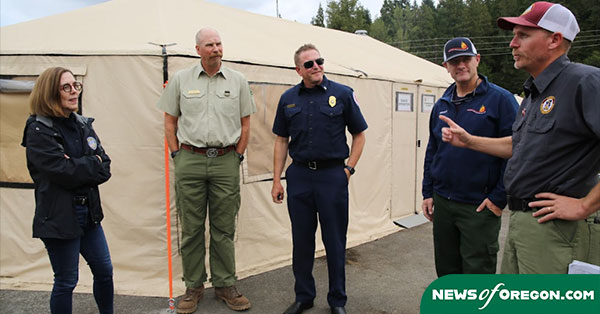 (Salem, OR) — Governor Kate Brown today visited the City of Oakridge, where she thanked local, state, and federal partners for their work in battling the Cedar Creek Fire and learned more about how local and state agencies are using investments from Senate Bill 762 to better prepare for and respond to wildfires. The Governor was joined by Oregon State Fire Marshal Mariana Ruiz-Temple, Deputy State Fire Marshal Travis Medema, and Oregon Department of Forestry Chief of Fire Protection Mike Shaw.

“Oakridge is no stranger to fire, having dealt with several large fires and the impacts of smoke over the past several years,” said Governor Brown. “But it’s incredible how this community and partners have come together during this year’s difficult fire season, and have taken proactive steps to be better prepared in the future. Today I heard from local and state officials about how investments from Senate Bill 762 are helping firefighters on the ground, as well as helping communities like Oakridge be more resilient to the ongoing threat of wildfires.”

As part of her visit, the Governor stopped at the Oakridge Fire Station where she received a briefing on the pre-planning and evacuation efforts that took place in August as east winds moved the Cedar Creek Fire closer to the Oakridge community. Local officials included Oakridge Mayor Chrissy Hollett, Oakridge Fire Chief Scott Hollett, Eugene Springfield Deputy Fire Chief Chris Heppel, and representatives from Lane County.

Following her visit to the Oakridge Fire Station, Governor Brown met with local, state, and federal officials at the Cedar Creek Fire Incident Command Post. Representatives from the U.S. Forest Service provided an update on the fire, and representatives from the Oregon Department of Forestry and the Office of the State Fire Marshal highlighted the pre-planning efforts and other work accomplished on the ground.

At the conclusion of the visit, the Governor met with and thanked members of the local fire crews currently assigned to the Cedar Creek Fire.