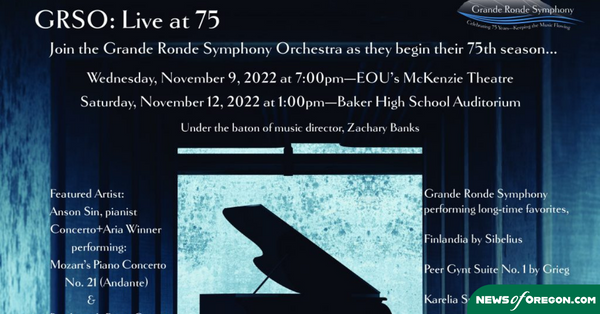 La Grande, OR. – (Release from Grande Ronde Symphony) The Grande Ronde Symphony will be starting their 75th season as Oregon’s longest continuously operating orchestra. The fall concerts will take place on Wednesday, November 9, 2022, beginning at 7:00 p.m. at McKenzie Theatre on the campus of Eastern Oregon University, followed by a repeat concert on Saturday, November 12th at Baker High School auditorium beginning at 1:00 p.m.

The performance will feature pianist, Anson K. Sin, the winner of the Open category of the Concerto+Aria Competition sponsored annually by the Grande Ronde Symphony. Possessing a rare combination of musical instinct, unique performance style, and technique, Anson K. Sin has found success in performances and competitions worldwide. He was first recognized for his debut performance with the Port Townsend Symphony Orchestra, at the age of eighteen, for which he received glowing reviews.

Anson has performed as a concert pianist in historical concert halls throughout the world, including New York City Carnegie Hall. Currently, Sin is pursuing his Doctor of Musical Arts at the University of Oregon, while instructing private piano classes and accompanying studios in the University’s School of Music and Dance.

Anson will be performing two beautiful slow movements from piano concertos that will be quite recognizable by the audience. You will hear the Adagio from Beethoven’s Piano Concerto No. 5, and the Andante from Piano Concerto No. 21 by Mozart. The Grande Ronde Symphony will also be performing several romantic pieces that are sure to be a crowd pleaser. Listen to Finlandia and Karelia Suite by Sebelius and the flowing storytelling of Greig as the orchestra performs his Peer Gynt Suite No. 1.

According to Alice Trindle, President of the Grande Ronde Symphony Association, “We could not be more excited to begin the orchestra’s 75th season with this amazing and beautiful program. She continued, “Under the direction of Zachary Banks, the symphony is truly recognizing its heritage in presenting music that stirs the soul and will set the stage for marking 75 years of bringing orchestral programming to greater northeast Oregon.”

The concerts will be performed at McKenzie Theatre in Loso Hall at EOU beginning at 7:00 p.m. on Wednesday, November 9th and repeated on Saturday, November 12th beginning at 1:00 p.m. at the Baker High School auditorium.

Tickets are available online at: GrandeRondeSymphony.org and at Direct Music Source in La Grande and Betty’s Books in Baker City. Special pricing is available for families and groups. Ask us about ‘Grace Notes’ at: grsymphony2@gmail.com