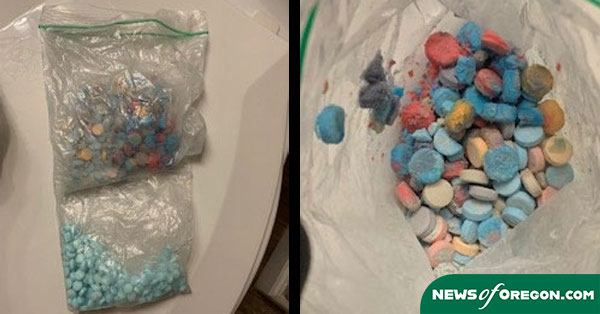 PORTLAND, Ore.— A Gresham, Oregon, man is facing federal charges for selling fentanyl that resulted in the overdose death of a 17-year-old Portland teenager.

According to court documents, an investigation leading to Hill began on June 16, 2022, when the Oregon-Idaho High Intensity Drug Trafficking Area (HIDTA) Interdiction Task Force (HIT), including members of the Portland Police Bureau’s (PPB) Narcotics and Organized Crime Division (NOC) and special agents from Homeland Security Investigations (HSI), responded to the overdose death of a 17-year-old teenager in Portland. Investigators found one full and one-half blue “M-30” pill on the victim’s desk along with small amounts of an unknown crystal substance and a white powder residue. Lab reports later confirmed that the pills recovered were counterfeit Oxycodone pills manufactured with fentanyl. Investigators believe the teen died of a fentanyl overdose.

Further investigation uncovered evidence that Hill is the third-level supplier of the fentanyl pills found in the teen’s room and that are believed to have caused the teen’s death. It was determined that Hill had been distributing fentanyl pills in quantities ranging from 10 to 100 pills in and around Portland for nearly a year. Hill sold the counterfeit pills for between $4 and $5 apiece. One week after the teen’s death, investigators set up and conducted a controlled purchase of more than three dozen M-30 pills from Hill.

Today, on September 7, 2022, investigators executed a search warrant on Hill’s Gresham residence. When PPB’s Special Emergency Reaction Team (SERT) entered the residence, Hill attempted to flush pills down the toilet. He was arrested without incident. More than 200 M-30 pills were found in Hill’s residence and vehicle along with a 9mm handgun, a scale, assorted drug packaging materials, and $4,480 in cash. A portion of the fentanyl pills recovered from Hill’s toilet were rainbow-colored.

Hill made his initial appearance in federal court today before U.S. Magistrate Judge Youlee Yim You. He was detained pending further court proceedings.

This case was investigated by the Oregon-Idaho HIDTA Interdiction Team, PPB NOC, and HSI with assistance from the Oregon State Police Crime Laboratory. Assistant U.S. Attorney Scott M. Kerin is prosecuting the case.

Rainbow fentanyl has appeared recently in several forms in cities across the country. Versions seized recently in the Portland area resemble thick pieces of brightly-colored sidewalk chalk or small multi-colored pills sometimes referred to as “skittles.”