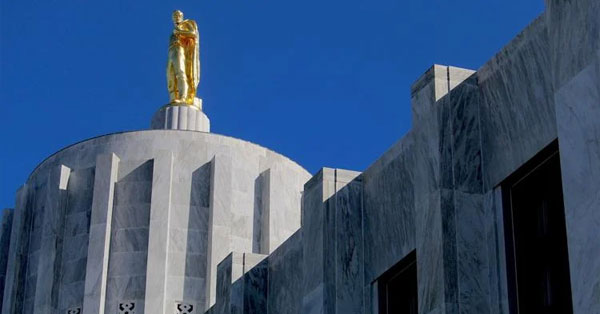 The sponsors of an Oregon ballot initiative to disqualify state legislators from re-election after a legislative walkout submitted 183,942 unverified signatures.

The initiative is a constitutional amendment that would exclude legislators from re-election following the end of their term if they are absent from 10 legislative floor sessions without permission or excuse. In order to qualify for the ballot, sponsors need 149,360 valid signatures, which is equal to 8% of the votes cast for governor in the most recent gubernatorial election.

The chief petitioners of the initiative are Oregon Education Association President Reed Scott-Schwalbach and SEIU503 Local Vice President Andrea Kennedy-Smith. The initiative has been endorsed by Oregon Gov. Kate Brown (D), Sen. Rob Wagner (D), and AFSCME Council 75. Senate Majority Leader Rob Wagner (D) said, “We haven’t been able to solve this problem legislatively for obvious reasons – they would likely walk out if we tried to refer something. So I’m following the lead of community advocates who have put this proposal forward.”

State legislatures require a specific number of members to be present in order to conduct official business, such as debating or voting on legislation. The minimum number of members required to conduct official business is a quorum. While a lack of quorum can occur due to unexpected events, such as illness or inclement weather, it can also be used as a political tactic. Several times in recent decades, members of a minority party left the state capitol or the state entirely to prevent the passage of legislation. This is a state legislative walkout.

The deadline to submit signatures for the 2022 ballot is July 8. Two statewide ballot measures are certified for the November ballot. The legislature voted to refer an amendment that would add “affordable health care as a fundamental right” to the Oregon Constitution and an amendment that would repeal language allowing slavery or involuntary servitude as criminal punishment. Between 1995 and 2020, about 46.43% (78 of 168) of the total number of measures that appeared on statewide ballots during even-numbered years were approved, and about 53.57% (90 of 168) were defeated.