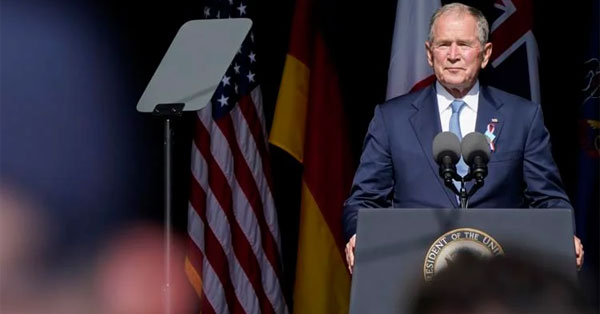 (The Center Square) – An Iraqi foreign national has been charged with attempting to bring people into the U.S. illegally to help orchestrate a plot to murder former President George W. Bush.

His arrest came after months of surveillance and a sting operation overseen by the FBI. At no time was Bush in danger, the U.S. Attorney’s Office said.

In response to the news, Bush’s chief of staff Freddy Ford issued a statement, saying, “President Bush has all the confidence in the world in the United States Secret Service and our law enforcement and intelligence communities.”

Shihab entered the U.S. in September 2020 on a visitor visa, according to his unsealed case file. In March 2021, he applied for asylum. Under the Trump administration, if he’d applied for asylum, he’d likely wait in detention until his case was processed. If his application were rejected, he’d then be processed for removal.

However, after Department of Homeland Security Secretary Alejandro Mayorkas drastically altered the asylum process, Shihab, and many entering the U.S. illegally, are filing asylum claims regardless of their eligibility as a way to stay in the U.S. Rather than remain in Mexico or be held in detention, DHS is releasing illegal immigrants into the U.S., prompting attorneys general to sue. U.S. Rep. Matt Gaetz, R-Fl., says it would take 14.5 years to deport all of the people the Biden administration has released into the U.S.

Five months after applying for asylum, Shihab began plotting to smuggle an individual he believed to be an Iraqi into the U.S. through the southern border. The individual was a confidential informant whose interactions were “coordinated under the direction of the FBI,” the U.S. Attorney’s Office said.

According to an FBI search-warrant application filed March 23, 2021, first reported on by Forbes, and unsealed by the Southern District of Ohio, two confidential informants helped the FBI catch Shihab.

One confidential informant claimed to offer Shihab help with obtaining false immigration and identification documents. The other purported to pay him thousands of dollars to illegally smuggle a family into the U.S. Shihab reportedly charged $40,000 to orchestrate the smuggling operation and received part of the money through the FBI sting operation.

He also discussed smuggling others into the U.S., including two people associated with Hezbollah, investigators said.

According to the charging document, Shihab planned to smuggle four Iraqis into the U.S. for the purpose of killing former President Bush in retaliation for invading Iraq in 2003. Shahib said they wanted “to kill former President Bush because they felt that he was responsible for killing many Iraqis and breaking apart the entire country of Iraq,” the warrant alleges.

After killing Bush, Shihab planned to smuggle his co-conspirators out of the U.S. through Mexico.

In February 2022, Shahib traveled to Dallas to survey the neighborhood where Bush lives, authorities said. He also went inside the George W. Bush Institute where he recorded video.

By March, the FBI applied for a search warrant for his phone records and arranged a sting operation in a hotel room in Columbus. While there, he looked at firearms and a U.S. Border Patrol uniform brought by the FBI informant.

Attempting to bring an individual illegally into the U.S. is a federal crime punishable by up to 10 years in prison. Aiding and abetting the attempted murder of a former president or federal official carries a prison sentence of up to 20 years.