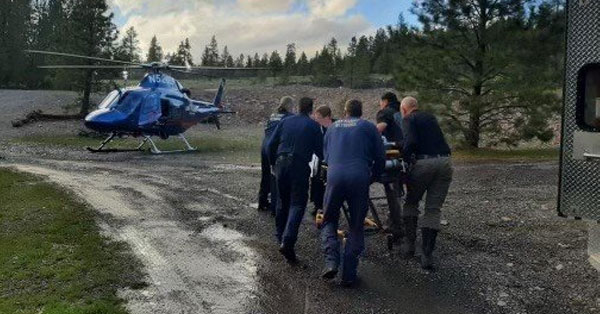 LA GRANDE – At approximately 4:41 p.m. on the afternoon of May 14th, Union County 911 received a report of an individual who slipped and fell approximately 150 vertical feet from a rock outcropping off of the Merry-Go-Round Road (USFS 2036-125).

On arrival, responders located a 41-year-old male with serious injuries at the bottom of the nearly vertical rock cliff. La Grande and Union Ambulance personnel assessed and began treating the patient while the SAR team rigged a 500-foot rope low-angle system for emergent extraction and a deputy coordinated with the Lifeflight helicopter.

A combined team of personnel worked to operate the rope system and extract the patient around the cliff up a steep hill to a waiting ambulance. The patient was then transported by ambulance a short distance to the waiting Lifeflight helicopter, and subsequently flown to a trauma center in Boise, Idaho.