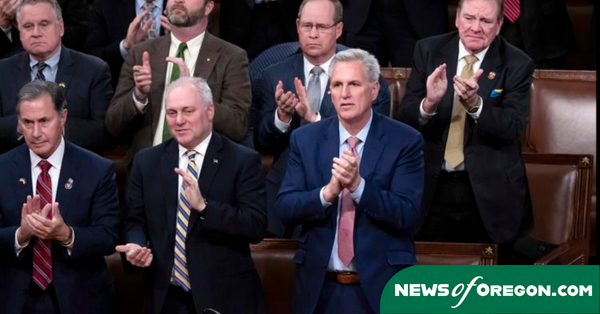 (The Center Square) – U.S. Rep. Kevin McCarthy, R-Calif., failed for a sixth time Wednesday afternoon to secure the needed 218 votes to become the next Speaker of the House. After the vote, the House adjourned and is expected to return later tonight.

The sixth vote, the third on Wednesday, ended similarly to nearly every other vote this week: about 20 Republicans voted for a Republican challenger to McCarthy, who can only afford to lose the support of four House Republicans.

But five Republicans have made clear they do not support McCarthy, and voting Tuesday and Wednesday showed that many more were willing to vote against him, even if it means drawing out the process for multiple days with no end in sight.

“It’s time to find a Speaker that will unify the GOP,” said U.S. Rep. Lauren Boebert, R-Colo., who voted for Donalds.

McCarthy’s support has slightly decreased from 203 votes in the first ballot to 201 in the most recent.

The multiple votes for a speaker is not unprecedented in American history, but it has not happened in 100 years. The longest battle for the position took about two months and 133 voting rounds.

Until the chamber elects a speaker, it will be largely inactive. The Senate easily selected Sens. Mitch McConnell, R-Ky., and Chuck Schumer, D-N.Y., to lead their respective parties in that chamber.

Former President Donald Trump vocalized his support behind McCarthy in a post on TruthSocial Wednesday, but it was not enough to sway Republican holdouts.

Some conservative Republicans have been unwilling to throw their support behind the California Republican, who many see as too liberal, but so far no challenger has arisen with enough clout to get the needed votes.

“In his 14 years in Republican leadership, McCarthy has repeatedly failed to demonstrate any desire to meaningfully change the status quo in Washington,” U.S. Rep. Scott Perry, R-Penn., said. “Despite our deep reservations we have continued to work in earnest to find a path forward with McCarthy, knowing that this crucial moment would come.

As The Center Square previously reported, Perry said he and other conservative members in the House laid out conditions for McCarthy but that he “balked” when faced with them. Those conditions included a promise to vote on a balanced budget, the “Texas Border Plan,” term limits for members of Congress, and the Fair Tax Act, which would create a national sales tax on certain services and property to replace the current income tax, payroll taxes, and estate and gift taxes.

“We requested transparent, accountable votes on individual earmarks that would require two-thirds support to pass, and to ensure that all amendments to cut spending would be allowed floor consideration,” Perry said. “He dismissed it.”