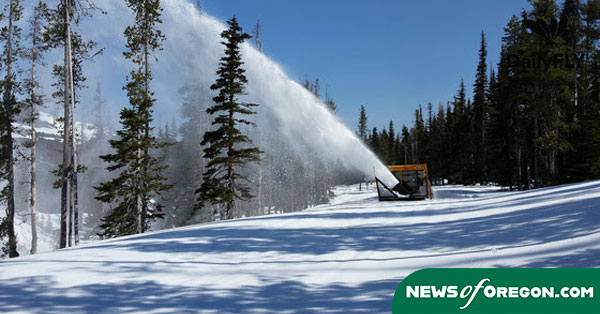 BEND — After a long winter and some surprising spring snow dumps, crews have cleared OR 242 McKenzie Pass and the gates open for all travelers on Monday, June 20. The pass closed for the winter season on November 1 last year.

Motorists driving on this winding road need to be on the lookout for cyclists and pedestrians on the roadway, as this is a popular scenic route for many types of road users. Remember that vehicles longer than 35 feet are prohibited from using the highway due to its sharp, narrow curves.

Travelers should still expect to encounter snow on the side of the road around the higher elevations of the pass. In the event of more late snow storms, there may be plows on the road.

Private funding built the highway in the 1870s for use as a wagon toll road. The section between the towns of Blue River in Lane County and Sisters in Deschutes County became a Forest Road in 1919, and soon after in 1925 was designated an Oregon State Highway.

McKenzie Pass became a seasonal scenic highway in 1962 with the completion of Oregon 126. Even during its tenure as the main route between the southern Willamette Valley and Central Oregon, the narrow, twisting roadway and high elevation (5,325 feet) made the highway too difficult to maintain and keep clear during the winter months.

Each year, we plan to close the highway the Thursday after Veteran’s Day and open it the third Monday in June. Snowfall times and amounts may change these dates. When we close the road, it is closed to everyone and is not maintained.