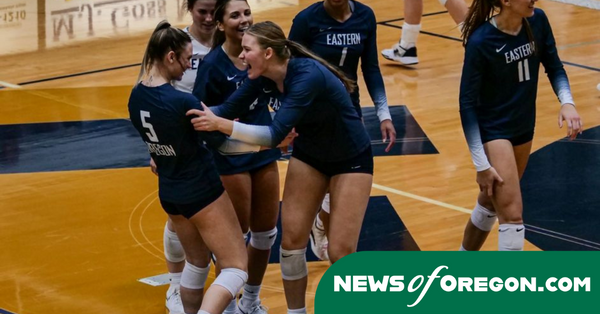 La Grande, Ore. – (Release from Eastern Oregon University)The Cascade Collegiate Conference Volleyball Title returned to Eastern Oregon University Saturday night after the Mounties swept the Eagles to wrap up regular season play. The win officially clinched the regular season championship for the Mountaineers bringing back the title for the second time in three years. Three straight set victories, 25-21, 25-19, 25-19, gave Eastern the win as they finish the season with a 28-2 record and only one conference loss. The loss drops Northwest to .500 going 15-15 in regular season play.

“I’m so proud of this team and what they have accomplished this year,” Coach Kaki McLean Morehead said. “It is hard in this conference to play consistent night in and night out and for that I am proud of their resilience, their grit and their motivation to do whatever it takes to achieve their goals.”

Eastern spread their offensive attack out in the first set with six players registering kills. While the Mounties only hit .026, their defense smothered the Eagles’ attack holding them to a negative .026 hitting percentage with more attack errors than kills. Eastern outscored the Eagles 8-3 down the stretch to take the 25-21 set victory.

Both offenses found their groove in the second set as they each hit over .350 with 14 or more kills. An early run had Eastern up 9-3 and Northwest couldn’t undo the damage as the Mountaineers cruised to a 25-19 set victory in the second. In the third and final set it was clean play that made the difference as the Mounties made only three attack errors on their way to 12 kills. Northwest held the advantage in kills with 14 but couldn’t overcome 13 attack errors. Jumping out to an early 10-3 lead, the Mounties didn’t take their foot off the gas and took the match with a 25-19 set victory.

“We are going to take a minute to enjoy this one, but we know there are bigger things to come with more hard work,” Morehead said.