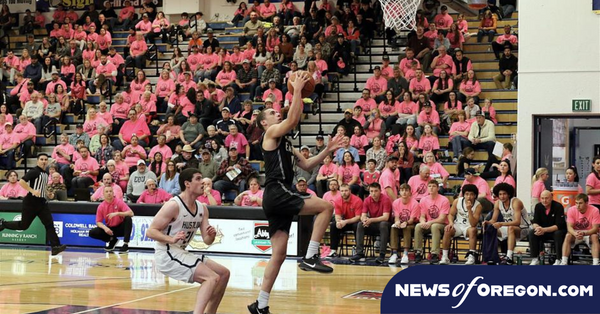 Klamath Falls, Ore. – (Release from Eastern Oregon University Athletics) For the first time in over a decade the EOU men’s basketball team is leaving Klamath Falls with a win. Dating back to December of 2012, the Hustlin’ Owls have had the Mounties’ number when at home, but Eastern ended the streak Saturday evening with an 87-72 win over OIT on their home court. With the win, the Mounties now sit at 13-6 overall and 10-3 in conference play.

Both teams started the game off strong as the Mounties took a narrow 37-33 lead in the first half. Phillip Malatare continued his hot streak putting up 11 points in 15 first-half minutes which was matched by OIT’s Jamison Guerra. EOU’s biggest lead in the first half came early when they went up eight three minutes into the game. From there the two teams battled back and forth exchanging leads five times. A Malatare buzzer beater at the end of the half gave the Mounties a four-point advantage at the break.

Eastern pulled away in the second half not giving up their lead at any point. Phillip Malatare and Preston Chandler each put up 10 points to account for 20 of EOU’s 50 second-half point total. With a comfortable lead down the stretch, Malatare put the nail in the coffin with six points in the final three minutes to secure the win. Eastern shot over 60% from the field and from the three in the second half to take the 87-72 victory.

The Mountaineers will now turn their sights to a weekend on their home court. First up for EOU is Walla Walla this Friday. Eastern will take on the Wolves in Quinn Coliseum for an afternoon bout with a 2 p.m. tipoff.