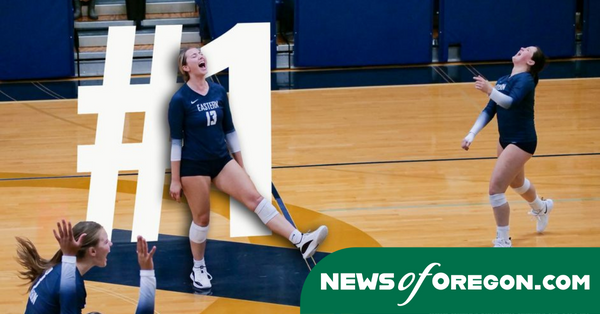 La Grande, Ore – The NAIA announced the results of the final Women’s Volleyball Coaches’ Top 25 Poll on Wednesday morning, Nov. 9. Eastern Oregon University, who has been at the top of the last three polls, claimed it’s fourth No. 1 ranking of the 2022 season in the final poll.

The No. 1 ranking comes as no surprise as the Mounties haven’t lost a match since the last poll on Oct. 26 going 4-0 over that span with two sweeps. Eastern also clinched the CCC regular season title this past weekend with wins over Evergreen State and Northwest as well as earning host privileges for the Conference Tournament to be played this Friday and Saturday, Nov. 11 and 12.

Set to host the conference tournament in Quinn Coliseum this weekend, the Mounties received a first-round bye and are slated to take on the lowest remaining seed in the semifinals Friday evening at 7:30 p.m. If they win they will play in the CCC Tournament Championship on Saturday afternoon at 3 p.m.

With a No. 1 ranking and regular season title, the Mounties already clinched their spot in the NAIA National Tournament. Matchups will be announced Monday morning at 8 a.m.