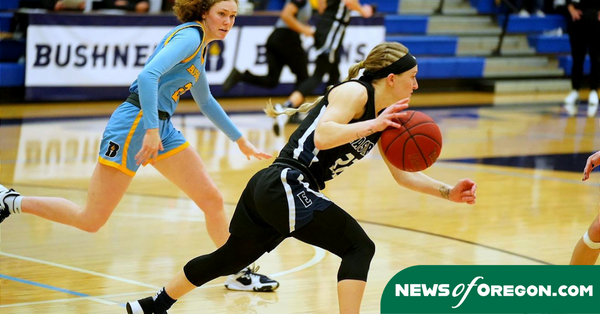 LA GRANDE, Ore. –  (Release from Eastern Oregon University Athletics) Despite shooting their worst percentage from the field all season, the No. 16 ranked Mounties relied on other aspects of their game to overcome the Beacons Saturday afternoon. Eastern took the 65-58 victory over Bushnell to move to 15-2 overall and 10-1 in conference play.

The first half didn’t go the Mounties’ way as some shooting struggles held them back. Bushnell jumped on the opportunity keeping it close in the first quarter then jumping out to a lead in the second. Led by Haley Hanson’s 10 first half points, the Beacons outscored Eastern 22-14 in the second quarter to jump out to a 33-27 lead at the half.

Eastern responded in the second half proving why they are one of the top teams in the country. Even on an off-night scoring, the Mounties still dominated the boards outrebounding Bushnell 55-34 overall and 28-18 in the second half. Bev Slater accounted for 22 of those rebounds which is good for second all-time in a single game for EOU. The Mounties worked back within two after a Halle Wright buzzer beater at the end of the third quarter. From there it was Sailor Liefke who put the game away in the fourth quarter. The senior guard put up 12 points in the final frame to give the Mounties a 65-58 victory.

EOU will hit the road again next week taking on Southern Oregon on Friday and Oregon Tech on Saturday. Tipoff for their next game against the Raiders will be at 5:30 p.m. on Saturday night in Ashland.