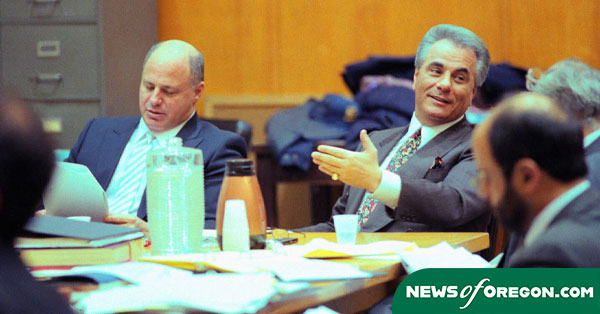 THROWBACK THURSDAY – On this day in 1992, Mafia boss John Gotti, who was nicknamed the “Teflon Don” after escaping unscathed from several trials during the 1980s, is sentenced to life in prison after being found guilty on 14 accounts of conspiracy to commit murder and racketeering. Moments after his sentence was read in a federal courthouse in Brooklyn, hundreds of Gotti’s supporters stormed the building and overturned and smashed cars before being forced back by police reinforcements.

Gotti, born and educated in New York City, became head of the powerful Gambino family after boss Paul Castellano was murdered outside a steakhouse in Manhattan in December 1985. The gang assassination, the first in three decades in New York, was organized by Gotti and his colleague Sammy “the Bull” Gravano.

The Gambino family was known for its illegal narcotics operations, gambling activities, and car theft. During the next five years, Gotti rapidly expanded his criminal empire, and his family grew into the nation’s most powerful Mafia family. Despite wide publicity of his criminal activities, Gotti managed to avoid conviction several times, usually through witness intimidation. In 1990, however, he was indicted for conspiracy to commit murder in the death of Paul Castellano, and Gravano agreed to testify against him in a federal district court in exchange for a reduced prison sentence.

On April 2, 1992, John Gotti was found guilty on all counts and on June 23 was sentenced to multiple life terms without the possibility of parole. While still imprisoned, Gotti died of throat cancer on June 10, 2002

ALSO ON THIS DAY:

On June 23, 1972, Title IX of the education amendments of 1972 is enacted into law. Title IX prohibits federally funded educational institutions from discriminating against students or employees based on sex.

It begins: “No person in the United States shall, on the basis of sex, be excluded from participation in, be denied the benefits of, or be subjected to discrimination under any education program or activity receiving Federal financial assistance.” As a result of Title IX, any school that receives any federal money from the elementary to university level—in short, nearly all schools—must provide fair and equal treatment of the sexes in all areas, including athletics.

Before Title IX, few opportunities existed for female athletes. The National Collegiate Athletic Association (NCAA), which was created in 1906 to format and enforce rules in men’s football but had become the ruling body of college athletics, offered no athletic scholarships for women and held no championships for women’s teams. Furthermore, facilities, supplies and funding were lacking. As a result, in 1972 there were just 30,000 women participating in NCAA sports, as opposed to 170,000 men.

Title IX was designed to correct those imbalances. Although it did not require that women’s athletics receive the same amount of money as men’s athletics, it was designed to enforce equal access and quality. Women’s and men’s programs were required to devote the same resources to locker rooms, medical treatment, training, coaching, practice times, travel and per diem allowances, equipment, practice facilities, tutoring and recruitment. Scholarship money was to be budgeted on a commensurate basis, so that if 40 percent of a school’s athletic scholarships were awarded to men, 40 percent of the scholarship budget was also earmarked for women.

Since the enactment of Title IX, women’s participation in sports has grown exponentially. In high school, the number of girl athletes has increased from just 295,000 in 1972 to more than 2.6 million. In college, the number has grown from 30,000 to more than 150,000. In addition, Title IX is credited with decreasing the dropout rate of girls from high school and increasing the number of women who pursue higher education and complete college degrees.

Information and photos from https://www.history.com/this-day-in-history