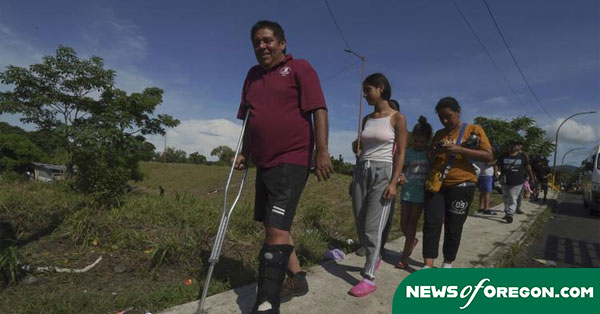 The number of deaths was included in fiscal year-end data when CBP reported a record 2.7 million enforcement actions in fiscal 2022, the highest in U.S. history.

Since last March, OLS officials have apprehended more than 319,000 illegal foreign nationals, made more than 21,000 criminal arrests, and reported more than 18,700 felony charges. They’ve also seized over 346 million lethal doses of fentanyl, enough to kill everyone in the United States.

A recent apprehension by DPS troopers provides a glimpse into the daily reality in Texas. In this instance, troopers stopped a driver of a dump truck on Interstate 35 in La Salle County driving north from the Laredo/Mexico border. Hiding inside were 84 mostly male Guatemalan and Mexican men and youth. They were apprehended and referred to Border Patrol and the driver, from Poteet, Texas, was arrested and charged with 84 counts of human smuggling.

DPS Lt. Chris Olivarez says those paying to be smuggled into the U.S. are predominately Mexicans, Guatemalans, Hondurans and El Salvadorans.

To help DPS troopers thwart criminal activity in the western most region of Texas, the Texas Military Department has expanded its border response 400 miles west to El Paso where a major increase in illegal border crossings is occurring.

The El Paso region’s surge can be traced to mass migration from South America, DPS El Paso regional director Jose Sanchez said. It’s a key destination for Mexican cartel drug smugglers and human traffickers who once they make it into El Paso use two major arteries to traffic people into the interior of the U.S.

The FBI has warned that El Paso is a major human smuggling and kidnapping destination where its agents continue to arrest smugglers and find stash houses.

At the southern most end of Texas, in the Rio Grande Valley, which has historically seen the most traffic of illegal entry, Texas National Guard engineers have been working to improve safety for University of Texas, Rio Grande Valley campus students.

Increased criminal activity and illegal river crossings have impacted campus life so much that university police asked the National Guard for help. After foreign nationals illegally enter Texas by crossing the Rio Grande River in-between ports of entry, they look for a place to hide to evade capture by law enforcement. In this case, they found a 1.5-acre area of dense overgrowth on university property. Using the area as cover, they began trespassing on campus and committing crimes, authorities said.

First Lt. Chris Daniel, 176th Engineer Brigade, part of Task Force East Engineers, said in a statement that criminal aliens were using the area “as concealment and to cross the campus and enter vehicles, which took them into the interior of the United States.” His group cleared the area to improve safety for the campus.

They’ve also seized 258 vehicles, recovered 181 stolen vehicles, and seized 31 firearms. Their 196 drug seizures have involved the confiscation of 16 kilos of heroin, 6 kilos of cocaine, 1.7 kilos of methamphetamine, and 3.6 pounds of marijuana. They’ve also seized $591,000 in cash and recorded over $286,000 in property damage of residents.

So far, the Texas legislature has allocated $4 billion of Texas taxpayer money to border security efforts.

This week, the state legislative budget board allocated $359,673,191 to the Texas Department of Criminal Justice to continue to fund OLS efforts. This includes $339 million to the Texas Military Department and $20.6 million to state agencies providing assistance.