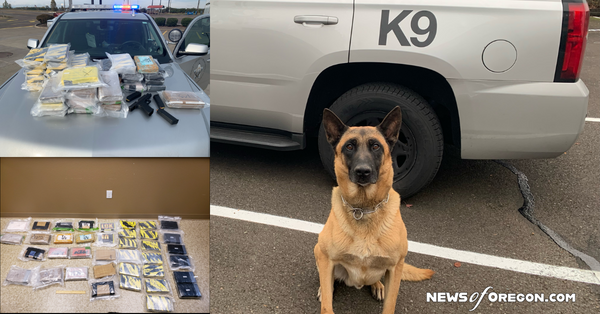 LINN COUNTY – On November 3, 2022, at approximately 1:01 P.M., an Oregon State Police Senior Trooper from the Salem Area Command stopped a vehicle for following too close, unlawful window tint, and a speed violation on Interstate 5 northbound near milepost 228.

During the traffic stop, the Trooper noticed signs of criminal activity and requested consent to search, which was denied by the occupants of the vehicle.  The Trooper deployed his drug detection K9 and after a positive alert to the odor of controlled substances, the Trooper searched the vehicle. The search of the vehicle revealed approximately 83 pounds of suspected cocaine and a firearm concealed in the vehicle.