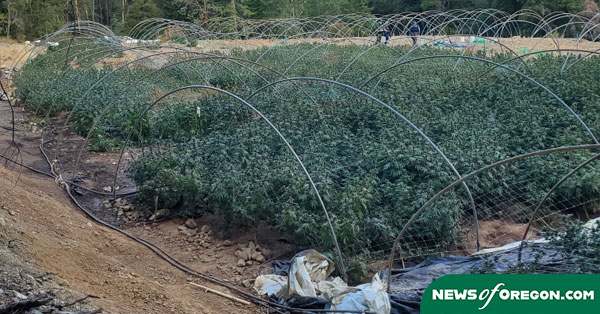 Located on the property were thirty-two (32) greenhouses that contained 6,848 illegal marijuana plants, several hundred pounds of hanging/drying marijuana that had been recently harvested, two (2) handguns, and a double-barreled shotgun.

Also located were several hundred pounds of processed marijuana stored in large black plastic garbage bags contained in a trailer for transport. All illegal marijuana was seized and ultimately destroyed. At least two (2) workers initially fled the property however, one (1) individual was detained, identified, interviewed, and later released.

Josephine County Code Enforcement responded to the scene to investigate as well.

The property is subject to multiple code violations for solid waste and unpermitted structures (greenhouses).  Josephine County will move forward with enforcement action against the property owner which could result in the closure of the property for one calendar year (illegal drug cultivation) and possible civil forfeiture.

Additionally, Oregon Water Resources Department staff responded to assist and identified violations for the unlawful appropriation of groundwater and unlawful diversion of surface water.  Violations of this kind are subject to both civil and criminal penalties.

OSP SWR DES and IMET were also assisted by the Department of Homeland Security Investigations (HSI) and the Drug Enforcement Administration (DEA).

No further information is available for release.