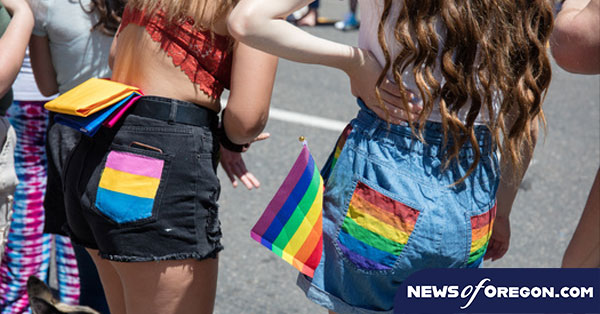 June is Pride Month, and businesses are showing their support for the LGBTQ community in a number of ways. But some corporations are being called out for also supporting anti-LGBTQ candidates for office.

Ian Morton is the executive director of the Q Center in Portland. He said his community has come a long way from the days when participants in Pride parades couldn’t show their faces for fear of retaliation from their employers.

But he added that the hypocrisy of some companies’ support this month is disappointing.

“Seeing organizations who are willing to stand against the community that they would purport to serve or to celebrate,” said Morton, “makes the LGBTQ+ community very wary of where they put their support, and whether that rainbow flag that goes up for the 30 days – if that’s actually meaningful, or if it’s just performative.”

A report from last year found 25 major corporations that showed support during pride had also given a total of $10 million in donations to support members of Congress who earned a ‘zero’ rating on the Human Rights Campaign scorecard.

Craig Hill is the client and treasury manager with Beneficial State Bank, which works with the Q Center. He said his bank strives to work in service of social equity and environmental sustainability.

Hill said he thinks it’s misleading for companies to hoist rainbow flags and, at the same time, support discriminatory policies at the legislative level.

“Some of the nation’s biggest banks, for example, fund anti-LGBTQ+ policies with their political donations,” said Hill, “despite publicly supporting those agendas and sponsoring Pride Month events. It’s really a form of ‘rainbow washing,’ if we’re being honest.”

Hill said people can use websites like Mighty Deposit to find out how their financial institutions are using their money.

Morton said it’s helpful to know he’s working with companies that align with his own values.

“Having those moments whenever you recognize that the folks you’re doing business with actually have concern about your community’s wellbeing and want to show up in meaningful ways,” said Morton, “that helps folks, especially in the nonprofit sector and in the advocacy sector, to give them the energy to soldier on.”