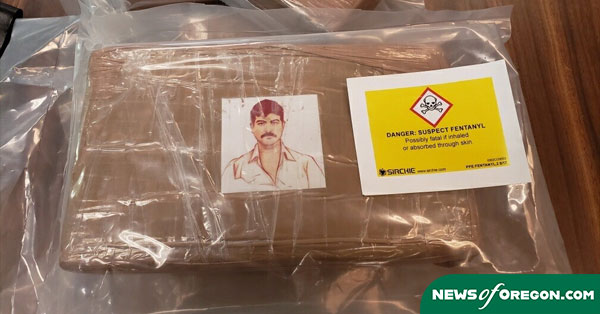 On September 28, 2022, at about 10:11 P.M., an Oregon State Police Trooper stopped a vehicle for a traffic violation in Madras. During the course of the stop, reasonable suspicion was developed for drug trafficking. The drug dog alerted to the presence of narcotics. A search of the vehicle revealed six (6) bundles concealed within the vehicle, with a gross weight of approximately 14.48 pounds. A preliminary test of the narcotics showed it was fentanyl powder.

The driver Jesus Villalpando Rubio (31) from Phoenix, Arizona, and the passenger Oscar Urias Haro (31) from Tucson, Arizona, were lodged in the Jefferson County Jail for various drug crimes.

This is an ongoing investigation with no further information being released.

According to the Drug Enforcement Administration (https://www.dea.gov/resources/facts-about-fentanyl), one kilogram of fentanyl has the potential to kill about 500,000 people.