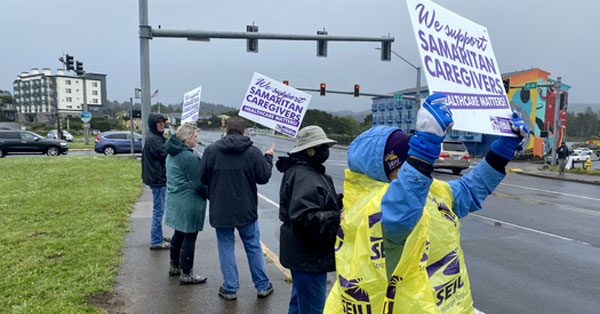 Health care workers at an Oregon hospital are calling for more support as short staffing takes its toll.

More than 100 members of SEIU Local 49 at Samaritan North Lincoln Hospital on the central Oregon coast are at a standstill in union contract negotiations with the hospital. The workers include emergency-room technicians, respiratory care practitioners and radiologic technologists.

Rachel Eggleton, a certified nursing assistant (CNA) at the hospital, explains the pressure workers have been under.

“Being alone as a CNA at night having nine patients, it’s too much,” Eggleton contended. “Everybody is important but of course some of them, they need more time, but it’s almost impossible.”

Over Memorial Day weekend, Eggleton and other SEIU Local 49 members rallied for negotiations to continue. Their biggest concerns are pay, staff retention and access to a union education fund to further their careers. Samaritan North Lincoln Hospital did not respond to a request for comment.

Starting pay for a CNA at the North Lincoln branch of Samaritan is just under $16 an hour. Eggleton pointed out her youngest daughter is making nearly as much as her at a fast-food restaurant without any training, adding it has been hard to keep up with the increasing cost of living in the area.

“We need a hospital that will attract quality employees that would want to stay,” Eggleton emphasized. “Because right now a lot of our employees are leaving because they just can’t afford to stay in Samaritan hospital anymore.”

Eggleton noted starting pay at other Samaritan hospitals for a CNA is more than $3 higher. She wants North Lincoln to align itself and negotiate with the other Samaritan care centers.

“We’re all held to the same standards, we’re all doing the same jobs, we’re all hardworking people,” Eggleton asserted. “So why does North Lincoln hospital have to be paid less?”

Disclosure: SEIU Local 49 contributes to our fund for reporting on Livable Wages/Working Families, Social Justice. If you would like to help support news in the public interest, click here.