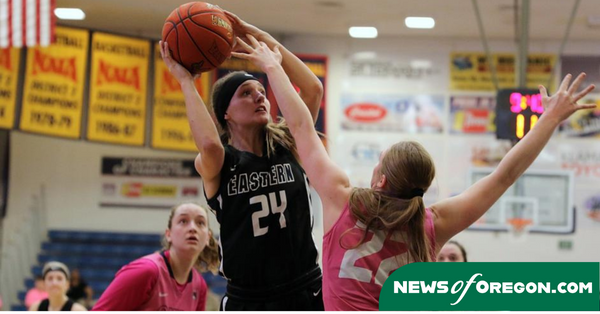 Corvallis, Ore. –(Release from Eastern Oregon Athletics) Beverly Slater has been named the CCC Rize Laboratory Women’s Basketball Player of the Week for her performance this past weekend. The junior out of Boise, Idaho had a stellar weekend helping the Mounties go 2-0 on a long conference road trip.

Friday night Slater led the Mounties with 16 points, shooting 6-12 from the field while adding a team leading 13 rebounds. Slater’s efforts propelled the nationally ranked No. 16 Mountaineers to a 71-56 victory over Southern Oregon University.

Saturday, Slater found her impact from behind the arc shooting 4-6 from deep adding 11 rebounds. Slater finished with 15 points leading the Mountaineers to a 79-58 victory over Oregon Institute of Technology.

Slater and the Mountaineers improved to 17-2 on the year and 12-1 in conference play after the 2-0 weekend. Eastern will be back in action at home this upcoming weekend taking on Walla Walla University in Quinn Coliseum on Friday, January 27. Tipoff is set for 12:00 p.m.