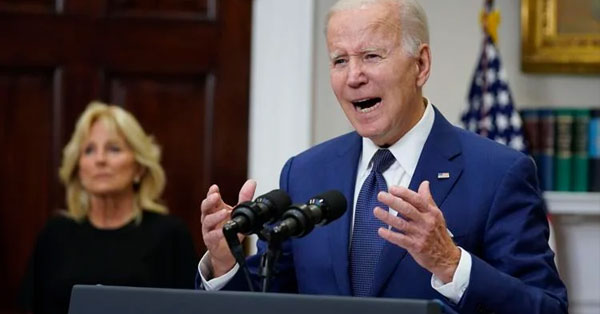 (The Center Square) – The tragic school shooting in Uvalde, Texas, has grabbed the attention of the nation and reinvigorated the debate over federal gun control measures.

The shooting at Robb Elementary School left 19 children, a teacher and a second adult dead, and a nation mourning. Authorities identified 18-year-old Uvalde resident Salvador Ramos as the shooter. He is now dead.

Soon after the shooting, President Joe Biden call for gun control measures in a speech at the White House.

“It’s time – for those who obstruct or delay or block the commonsense gun laws, we need to let you know that we will not forget,” Biden said. “We can do so much more. We have to do more.”

Critics accused Democrats of politicizing this and other shootings by focusing on the race of the shooter when he was white in last week’s massacre in Buffalo and on gun control issues when the shooter in Texas was not white. Ramos was Hispanic.

Republicans have pointed to the need for an emphasis on mental health instead.

“It does not appear that the dead alleged shooter/killer, Salvador Ramos, was a white supremacist,” Larry Elder, former Republican gubernatorial candidate in California, wrote on Twitter. “Biden/media, post Buffalo, deftly switch from ‘angry white men’ to ‘easy access of guns.’”

The shooting has also stirred up Texas politics. Actor Matthew Mcconaughey, who flirted with running for Texas governor before decising not to, spoke out on the shooting.

“As you are all aware, there was another mass shooting today, this time in my home town of Uvalde, Texas,” he said, adding that we need to ask the question, “How do we repair the problem?”

Texas Gov. Greg Abbott commented on the tragic shooting and said there is a full investigation underway.

“Texans across the state are grieving for the victims of this senseless crime and for the community of Uvalde,” he said in a statement. “Cecilia and I mourn this horrific loss and we urge all Texans to come together to show our unwavering support to all who are suffering. We thank the courageous first responders who worked to finally secure Robb Elementary School. I have instructed the Texas Department of Public Safety and the Texas Rangers to work with local law enforcement to fully investigate this crime. The Texas Division of Emergency Management is charged with providing local officials all resources necessary to respond to this tragedy as the State of Texas works to ensure the community has what it needs to heal.”