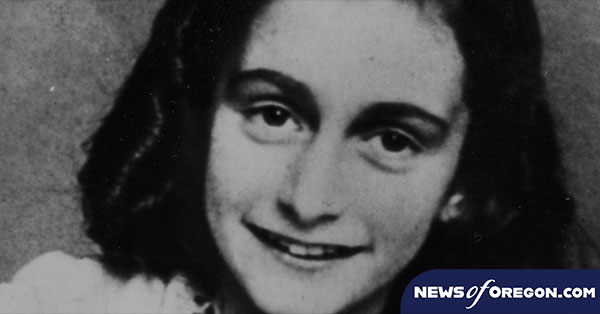 THROWBACK THURSDAY – On this day in 1944, acting on tip from an informer, the Nazi Gestapo captures 15-year-old Jewish diarist Anne Frank and her family in a sealed-off area of an Amsterdam warehouse.

The Franks had taken shelter there in 1942 out of fear of deportation to a Nazi concentration camp. They occupied the small space with another Jewish family and a single Jewish man, and were aided by Christian friends, who brought them food and supplies. Anne spent much of her time in the so-called “secret annex” working on her diary. The diary survived the war, overlooked by the Gestapo that discovered the hiding place, but Anne and nearly all of the others perished in the Nazi death camps.

Annelies Marie Frank was born in Frankfurt am Main, Germany, on June 12, 1929. She was the second daughter of Otto Frank and Edith Frank-Hollander, both of Jewish families that had lived in Germany for centuries. With the rise of Nazi leader Adolf Hitler in 1933, Otto moved his family to Amsterdam to escape the escalating Nazi persecution of Jews. In Holland, he ran a successful spice and jam business. Anne attended a Montessori school with other middle-class Dutch children, but with the German invasion of the Netherlands in 1940 she was forced to transfer to a Jewish school. In 1942, Otto began arranging a hiding place in an annex of his warehouse on the Prinsengracht Canal in Amsterdam.

On her 13th birthday in 1942, Anne began a diary relating her everyday experiences, her relationship with her family and friends, and observations about the increasingly dangerous world around her. Less than a month later, Anne’s older sister, Margot, received a call-up notice to report to a Nazi “work camp.” Fearing deportation to a Nazi concentration camp, the Frank family took shelter in the secret annex the next day. One week later, they were joined by Otto Frank’s business partner and his family. In November, a Jewish dentist—the eighth occupant of the hiding place—joined the group.

For two years, Anne kept a diary about her life in hiding that is marked with poignancy, humor, and insight. The entrance to the secret annex was hidden by a hinged bookcase, and former employees of Otto and other Dutch friends delivered them food and supplies procured at high risk. Anne and the others lived in rooms with blacked-out windows, and never flushed the toilet during the day out of fear that their presence would be detected. In June 1944, Anne’s spirits were raised by the Allied landings at Normandy, and she was hopeful that the long-awaited liberation of Holland would soon begin.

On August 1, 1944, Anne made her last entry in her diary. Three days later, 25 months of seclusion ended with the arrival of the Nazi Gestapo. Anne and the others had been given away by an unknown informer, and they were arrested along with two of the Christians who had helped shelter them.

They were sent to a concentration camp in Holland, and in September Anne and most of the others were shipped to the Auschwitz death camp in Poland. In the fall of 1944, with the Soviet liberation of Poland underway, Anne was moved with her sister Margot to the Bergen-Belsen concentration camp in Germany. Suffering under the deplorable conditions of the camp, the two sisters caught typhus and died in February 1945. The camp was liberated by the British less than two months later.

Otto Frank was the only one of the 10 to survive the Nazi death camps. After the war, he returned to Amsterdam via Russia, and was reunited with Miep Gies, one of his former employees who had helped shelter him. She handed him Anne’s diary, which she had found undisturbed after the Nazi raid.

In 1947, Anne’s diary was published by Otto in its original Dutch. An instant best-seller and eventually translated into more than 70 languages, The Diary of Anne Frank has served as a literary testament to the nearly six million Jews, including Anne herself, who were silenced in the Holocaust.

The Frank family’s hideaway at Prinsengracht 263 in Amsterdam opened as a museum in 1960. A new English translation of Anne’s diary in 1995 restored material that had been edited out of the original version, making the work nearly a third longer.

This article comes from: https://www.history.com/this-day-in-history