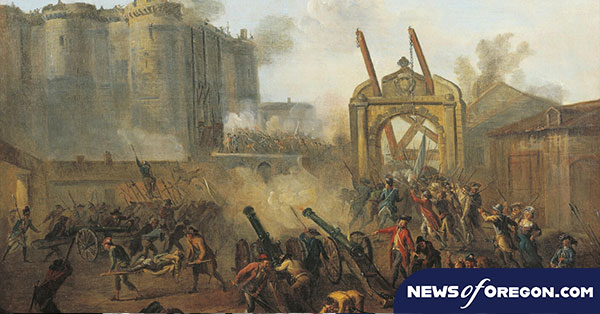 THROWBACK THURSDAY – On this day in 1789, Parisian revolutionaries and mutinous troops storm and dismantle the Bastille, a royal fortress and prison that had come to symbolize the tyranny of the Bourbon monarchs. This dramatic action signaled the beginning of the French Revolution, a decade of political turmoil and terror in which King Louis XVI was overthrown and tens of thousands of people, including the king and his wife Marie Antoinette, were executed.

By the summer of 1789, France was moving quickly toward revolution. Bernard-René Jordan de Launay, the military governor of the Bastille, feared that his fortress would be a target for the revolutionaries and so requested reinforcements. On July 12, royal authorities transferred 250 barrels of gunpowder to the Bastille, and Launay brought his men into the massive fortress and raised its two drawbridges.

At dawn on July 14, a great crowd armed with muskets, swords, and various makeshift weapons began to gather around the Bastille. Launay’s men were able to hold the mob back, but as more and more Parisians were converging on the Bastille, Launay raised a white flag of surrender over the fortress. Launay and his men were taken into custody, the Bastille’s gunpowder and cannons were seized, and the seven prisoners were freed. Upon arriving at the Hotel de Ville, where Launay was to be arrested and tried by a revolutionary council, he was instead pulled away by a mob and murdered.

The capture of the Bastille symbolized the end of the ancien regime and provided the French revolutionary cause with an irresistible momentum. In 1792, the monarchy was abolished and Louis and his wife Marie-Antoinette were sent to the guillotine for treason in 1793.

On this day in 2016, thousands gathered along the seafront of Nice, France to celebrate Bastille Day—the country’s independence holiday. The mood turned from joy to horror, when a white truck barreled through a pedestrian-filled closed street. In the end, 86 were dead, including 10 children, and over 400 spectators were left injured.

While fireworks shot into the sky for 30,000 spectators, Mohamed Lahouaiej-Bouhlel, a 31-year-old Tunisian man who had been planning his attack for a year, drove past the festivities several times in a truck he’d rented just three days prior. Shortly after the show concluded, he put his plan into motion. He jumped the curb with the truck, zigzagging through the crowd at 60 miles per hour, deliberately running people over. Those who were celebrating just moments before began scrambling for safety, running into hotels and onto the beach.

The attacker, who was previously “totally unknown” to security services, tore through over a mile of the pedestrian-filled promenade before being stopped by police. He was armed with an automatic pistol, but also carried several replica assault weapons, and even a disarmed grenade, to escalate his threatening appearance. Using the pistol, he fired shots at police, who shot and killed him.

In the days after the attack, shrines to the victims were built around the metal barriers closing off the promenade. Prime Minister Manuel Valls declared three days of mourning, and all festivities were canceled, including a five-day jazz festival and a Rihanna concert.  Valls also called for volunteers to help boost security. 12,000 people stepped up.

Two days later, the Islamic State took responsibility for the attack. On July 22, five of Lahouaiej-Bouhlel’s accomplices were charged in the attack.

Despite the relatively speedy resolution, citizens and officials alike were left wondering, how, after everything the country had been through less than a year earlier in Paris, an attack like this could have happened again.

“Questions are raised,” Christian Estrosi, the president of the Provence-Alpes-Côte d’Azur region of France, which includes Nice, said in his address after the attack. “As I try to comfort the families, I also try to contain my anger; I can’t hide to you that I feel a deep anger. How is it possible in our country that, after everyone said there was a state of emergency, a state of war, we forgot it after Charlie Hebdo, and then there was the Bataclan. After the Bataclan, we forgot, and then there was Brussels. After Brussels, we forgot and there was Nice. There are questions that need to be answered.”

Some speculated that, after the Euro 2016 soccer tournament went on with no incidents, security felt the country was in the clear. Meanwhile, the BBC reported that the 6 agencies’ lack of communication might have been the cause of confusion and gaps in security. An investigation into potential lapses was opened in April 2017 after several families filed a lawsuit, but no parliamentary investigative committee was formed.

The 2017 Bastille Day fireworks were canceled out of respect for those killed.