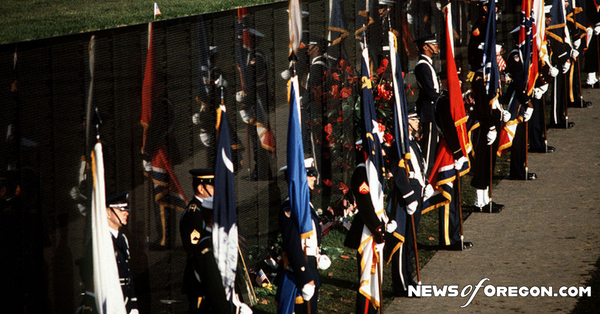 Near the end of a weeklong national salute to Americans who served in the Vietnam War, the Vietnam Veterans Memorial is dedicated in Washington, D.C. after a march to its site by thousands of veterans of the conflict. The long-awaited memorial was a simple V-shaped black-granite wall inscribed with the names of the 57,939 Americans who died in the conflict, arranged in order of death, not rank, as was common in other memorials.

The designer of the memorial was Maya Lin, a Yale University architecture student who entered a nationwide competition to create a design for the monument. Lin, born in Ohio in 1959, was the daughter of Chinese immigrants. Many veterans’ groups were opposed to Lin’s winning design, which lacked a standard memorial’s heroic statues and stirring words. However, a remarkable shift in public opinion occurred in the months after the memorial’s dedication. Veterans and families of the dead walked the black reflective wall, seeking the names of their loved ones killed in the conflict. Once the name was located, visitors often made an etching or left a private offering, from notes and flowers to dog tags and cans of beer.

The Vietnam Veterans Memorial soon became one of the most visited memorials in the nation’s capital. A Smithsonian Institution director called it “a community of feelings, almost a sacred precinct,” and a veteran declared that “it’s the parade we never got.” “The Wall” drew together both those who fought and those who marched against the war and served to promote national healing a decade after the divisive conflict’s end.

ARTICLE AND INFORMATION FROM: https://www.history.com/this-day-in-history