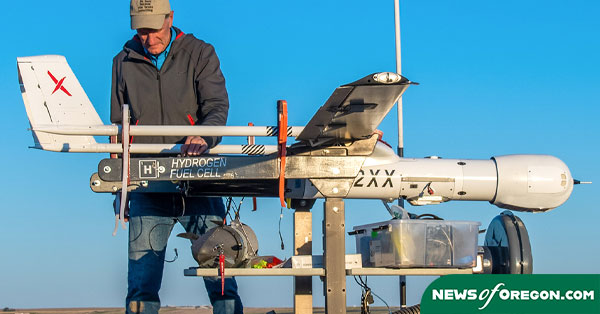 PENDLETON, Ore. – An uncrewed aircraft system powered by liquid hydrogen fuel made its maiden flight in Eastern Oregon recently, an important step toward a future of using the clean energy source in aviation and other industries and potentially reducing carbon dioxide emissions.

MSU’s Raspet Flight Research Laboratory, designated both as the Federal Aviation Administration’s UAS Safety Research Facility and as official UAS Test Sites for both the FAA and the Department of Homeland Security, is leading a multi-pronged Department of Defense-funded effort to make UAS cooler, quieter and more efficient.

“The fueling station technology can be used anywhere that there is available electricity and water, which is used to make the hydrogen,” said Jake Leachman, associate professor in WSU’s School of Mechanical and Materials Engineering. “That basically makes this the most convenient fuel anywhere in the world.”

“Every aspect of this overall initiative, from this hydrogen work to our acoustic and thermal research, is about creating the capability to fly undetected at lower levels,” said Caden Teer, chief research engineer at MSU’s Raspet Flight Research Lab. “In each case, we’re ensuring the UAS retain sufficient capabilities to meet mission requirements.”

The aviation industry currently produces about 3% of global carbon dioxide emissions but does not have a ready solution to reduce its emissions. Technologies that are viable on the ground, such as batteries or solar panels, are not yet practical for flying, and researchers are increasingly looking to hydrogen as a possible low-carbon solution.

“The use of hydrogen fuel in Group 2 UAS has the potential to be a big deal for military applications,” said Don Harring, Insitu product manager for advance development. “Liquid hydrogen fuel, with electric propulsion, will allow these size UAS to fly with almost no noise. This allows operators to fly more covert missions and get better intelligence, surveillance and reconnaissance data than with typical heavy fuel propulsion.”

Group 2 UAS weigh between 21 and 55 pounds and normally operate at altitudes lower than 3,500 feet.

“Hydrogen is a fuel that is gaining a lot of momentum,” said Ian Richardson, a former postdoctoral researcher in WSU’s School of Mechanical and Materials Engineering who led the hydrogen project. “Working on hydrogen technologies for the past 10 years and now having the resources and everything coming together, it is a great time to be an engineer. It’s on us to deliver to get these technologies into the market and start really having an impact.”

For the UAS flight, conducted at the Pendleton Unmanned Aerial Systems Testing Range in Oregon earlier this summer, the researchers used a liquid hydrogen fueling station to fill the tank, which powered a fuel cell to produce electricity for the flight.

“This is the first known 3D‑printed liquid hydrogen fuel tank that’s ever flown, and it’s a new type of liquid hydrogen storage technology,” said Richardson. “This was an initial proof-of-concept that we are looking to scale up to larger platforms, including unmanned and manned applications.”

The flight brought together several technologies that researchers have been working on for about a decade. The researchers developed the unique 3D‑printed liquid hydrogen storage tank that was used in conjunction with a fuel cell to power the flight. The tank is made of a lightweight polymer instead of metal. It also saves weight and fill time by having a patent-pending heat exchange system within its tank wall to cool the insulation during fills and warm the hydrogen vapor for use.

The project also made use of a WSU-developed portable hydrogen fueling station. The liquefier and refueling station are contained entirely within an 8‑cubic foot shipping container. While researchers have known how to liquify hydrogen for some time, the challenge was to create a safe and portable system that could dispense small amounts of it. The researchers had to miniaturize all the nozzles and connections from much larger scale technologies for a lightweight flight-rated tank. The fueling station can be easily purged and transported from one location to the next.

Lessons learned from the overall project could also have non-military applications, such as allowing UAS, for example, to survey crops more quietly, resulting in fewer disturbances for those on the ground.