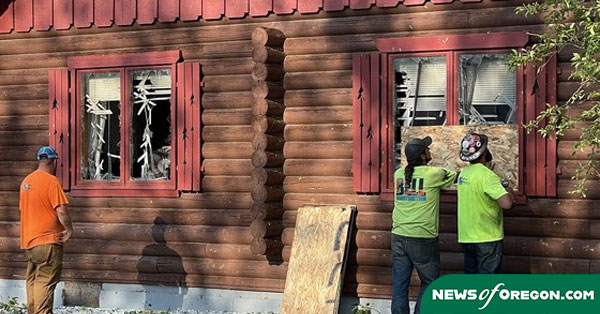 WALLOWA – On Aug. 11, a hailstorm hit eastern Oregon’s Wallowa County during the middle of the day – and right in the middle of the Oregon Department of Transportation’s OR 82 Wallowa/Lostine ADA sidewalk ramp upgrade project. Global Electric was working as a project subcontractor, trying to shelter from the onslaught, when vacuum truck operator Randy Burns went to the rescue of a pedestrian – and others jumped in to help with the unexpected storm damage. Here’s what happened according to Contractor Murraysmith’s Construction Inspector Henry Lugo:

“During the peak of the hailstorm, Randy was sheltering alongside his Vac truck when he noticed an elderly woman crossing the highway at the Holmes Street intersection near the East end of Wallowa. The woman was clearly distressed, likely had a physical handicap, and had already sustained a head injury from the over 3” diameter hail. Randy selflessly ran to the woman’s aid, carried her to a nearby carport and provided care to her while waiting for paramedics to arrive. I have since heard that the women is recovering in a local hospital and that her injuries would have been much more serious and could have been fatal, if not for Randy’s quick actions.

“Following the hailstorm, drill operator Aaron Griffiths and laborer Willy Ramos  immediately made the surrounding worksite safe, cleared the highway of debris for emergency vehicles, and closed an adjacent road that had downed overhead lines. Additionally, Aaron, Willy and Randy helped board up the windows of two residences that had suffered hail damage and donated most of the remaining plywood they had.

“At the time of the hailstorm, Matt Murray, journeyman electrician, was finishing up conduit install near the Wallowa High School. A flagger was injured in the hand by hail while trying to make it to shelter. Following the storm, Matt immediately took up the injured flagger’s post and helped direct both traffic and emergency vehicles until both travel lanes could be reopened

Randy, Aaron, Willy and Matt went far above their normal duties. It is clear that their fast actions aided members of the community and kept the traveling public safe during this emergency.”

ODOT Area Manager Ken Patterson heard about the efforts of the crew. It was just one part of a community wide response to the challenging weather system that caught many off guard.

“It’s just another example of our contractors going over and above when the need arises,” Patterson said. “They obviously stayed at their posts to protect traffic and put the safety of the public over their own.”