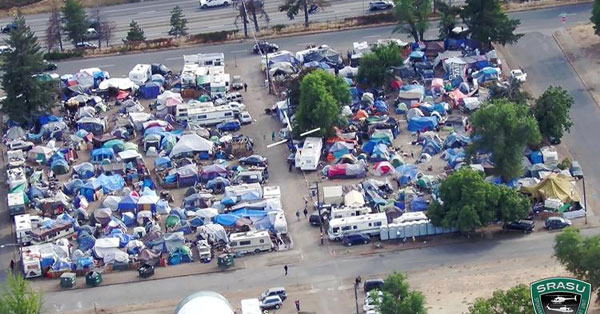 (The Center Square) – The Washington State Department of Transportation is objecting to a homeless encampment on its Spokane property being declared a “chronic nuisance.” The agency warns of legal ramifications if city and council officials attempt to disband the site without adequate shelter space available for people who are displaced.

Meidl has joined Sheriff Ozzie Knevovich in planning for closure of the site called Camp Hope near Interstate 90 and Freya Street by mid-November.

Knezovich said being an elected sheriff gives him the constitutional and legal authority to restore public health and safety by relocating residents of the camp, which he described as a hub of criminal activity.

He is supported in that plan o supported by the Spokane County Commission and Mayor Nadine Woodward.

Millar objected to WSDOT being held responsible by local officials for formation of the camp 10 months ago. He said the camp was founded following protests at city hall over lack of shelters and affordable housing.

“The city’s counterproductive approach of seeking to shift blame onto WSDOT rather than working collaboratively ignores not only the complex challenges at Camp Hope but is also constitutionally suspect,” he said.

WSDOT is still collaborating with the state Department of Commerce, Washington State Patrol, Empire Health Foundation, and city administration in accordance with the state’s Right-of-Way Safety Initiative to relocate people from camps into shelters, he said.

“Unfortunately, instead of engaging in meaningful collaboration with the state and other local partners to address this important local issue, the city served an unlawful Chronic Nuisance Notice on WSDOT for alleged violations of the Spokane Municipal Code, presenting an unreasonable and unrealistic ‘Chronic Nuisance Abatement Agreement’ with an arbitrary and significantly truncated timeline,” said Millar.

Earlier this month, Meidl sent a letter to WSDOT stating the homeless encampment near I-90 and Freya Street posed a chronic nuisance because multiple crimes had occurred at the site, which also posed a health risk. He said problems there included littering, trespassing, drug use and distribution, burglaries, theft, and a drive-by shooting. Knezovich added the violent crimes of rape, assault, and branding to that list.

WSDOT countered that, as a result of the legislature’s right-of-way initiative to move the homeless off state land, Commerce offered local governments and service providers in Spokane $24.3 million this summer to come up with proposals to transition people out of the camp. Spokane Mayor Nadine Woodward and Knezovich were among those who criticized Commerce for requiring solutions to a complex problem within 30 days for funding eligibility.

Although WSDOT retains the goal of partnering with the city to address the challenges of the camp, Spokane’s unilateral abatement plans and threats undermine that goal, said Millar.

Johnnie Perkins, the city administrator, has demanded that WSDOT not only help remove people from the site but pay $350,000 to cover police response to problems in and around the camp and the costs of cleanup and provision of other services.

Meidl reports the officer who responded to the camp alone has cost the city more than $500,000 in overtime patrol hours.

Millar said there are four benchmarks that must be met to effectively remove the encampment. These include the ability to offer shelter and services to displaced individuals; develop a plan to securely store the personal property of those relocated; safety and security for not only people who are moving but work crews clearing the site; and restoration and cleanup of the property.

“WSDOT cannot meet these benchmarks alone, nor is it obligated to under the law,” said Millar.

“Disappointingly, the city thus far apparently remains unwilling to work cooperatively and productively in partnership with the state to identify and implement a full and complete resolution to Camp Hope,” he wrote in the response letter.

To disband the camp without taking time to make alternate living accommodations for its residents would run afoul of state and federal law, he concluded.